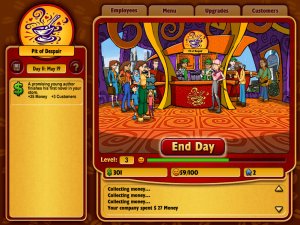 Who doesn't like coffee? Based on a quick, informal survey of the people around me: No one. I'm sure the dreams of many of the coffee craving population include running a hip coffee shop of their own, where kooky people could sit around, drink coffee and talk about their lives. Luckily for us, we can all live the dream thanks to Coffee Tycoon, but will it turn into a popular classic, like Friends, or a horrible nightmare, like Becker?

After persuading the game to run (almost) in a window by alt tabbing, I quickly grew to love the lack of a menu option to turn off the jazz music that infested the opening screens. Inspired by the uplifting sounds, I decided to name my caffeine emporium the "Pit of Despair", and choose a "wacky" style for the new shop's fittings. The last step was to choose a location from a range of US cities, including NY, Miami, and of course Seattle. I plumped for Miami, just on the off chance someone would mug the jazz band on their way there.

As an intelligent and experienced gamer, I decided to skip the tutorial and jump straight in. Because Anarchy Entertainment, the developer, clearly hate humanity there was still no way to turn off the god-awful music, and I noticed that you can only save one game at a time. There's no autosave, but considering you only get to store the one game that might be something more of a blessing.

So, I'd got a shiny new store, and I needed to spend some money! Unfortunately, I only started with $100, which would just about allow me to buy in some decaf from the menu section. There were upgrades hiding in another tab but I couldn't even afford to look at them, let alone buy them. I went with the default staff selection, a mix of mostly baristas, with 15% managers, and 5% executives.

The day started, as would many after it, with me looking into to my not very busy shop. The ironic events department informed me that the customers were satisfied due to the "soothing music". I managed to spend $5 and make $5, leaving me with a net profit of... nothing! I decided to fire the management. The next day, I went $4 into profit, and the day after $5! This was working, and soon I'd be able to afford a cup of coffee in my own shop.

Unfortunately, the profits leveled out, and I noticed that despite my having fired them the manager and executive still seemed to be hanging around at the back of the store. To reach the next level on the ladder of corporate coffee success I needed to reach the lofty goal of 25 customers, of which I was seven short so I decided to fire all the baristas. By the end of the day I'd lost $10, taking me down to a dollar below my starting cash, but I was at 23 customers. I gave the managers another day and they blasted the target, earning me a $50 bonus and five new customers. The next target was 50 customers, but I was losing money per day. I decided to hire some baristas back, as like the managers before them they'd simply hung around despite the lack of pay. I noticed the executive had not left either, presumably because he had no where else to go since his wife left him due to his slow descent into drink, drugs and gold faucets in bathrooms (they seem to get through them). On the plus side the jazz music suddenly stopped for no apparent reason.

I tried hiring more baristas, in an effort to actually sell some coffee, but the general tide of the business was towards a loss. However, I was making money overall thanks to the random events that popped up throughout each day. Once I hit level 3, I was rewarded with yet more money and customers. Clearly what I needed was more stores, so I rehired my unshaven bum of an executive, and put him to work on expanding my empire. I also downsized some more baristas. 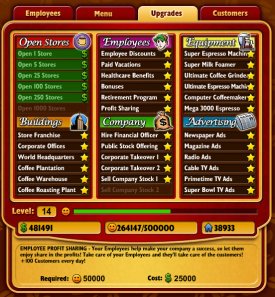 By this point, I had come to be fully aware of the utter pointlessness of the in game screen. Unlike, say, Lemonade Tycoon there is no way to skip a day, so you have to let each one run its course, and there's no real information that you can use to steer your upgrades choices . Though different customers did appear as your empire grew it had approximately no impact on anything, except slowing down the game. The random events were, well, random, and they didn't appear to be related to anything actually going on in my coffee corporation.

Anyway, by this point I had enough in the bank to upgrade my coffeeteria, so I nipped into the upgrades screen. For a mere $500 I could give my employees a wide ranging set of benefits, when I wasn't firing them all, netting me an extra 3 customers a day, thanks, presumably, to karma. Can't say fairer than that.

Out of boredom I experimented in only having executives for a while. This seemed to work, though I quickly went into debt, paying out money I didn't have. Luckily, I noticed that this debt was not stored anywhere, so when I did make money, I never had to pay any back, clearly just screwing my employees and suppliers. Karmically, my accountant embezzeled $5. I let him off. The next day he embezzeled $20.

Most of the following days were a blur of clicking "End Day", "Start Day", "End Day", "Start Day" until I approached a trance like state of clicking (while playing the same Plaid song again and again and again). After realising I was generating enough customers through the random events and the free daily extras from new menu items I pretty much gave up on the management. Unfortunately they started a union, losing me also twenty customers. Because unions do that. Ahem.

Luckily, the random events kept me interested, with off the wall combinations such as "Hot weather slows sales today" immediately followed by "Cold weather boosts sales today!". That wacky Miami weather. I also got a warning that "my company was going broke", a warning that was strangely lacking when it did, in fact, go broke.

At around level 10, the stupidity kicked in with a vengeance. I made enough to perform a corporate take over that gave me 250 new stores. Every day. This meant I never had to worry about dealing with stores ever again, and they became irrelevant to my future dealings. Of course, I still got messages saying "You don't have enough stores, get to work" or "You need to expand, build more stores!", but lets not let that get in the way of my masterplan. I had purchased pretty much every upgrade and menu item I could at that level, bar the public stock offering, which nets you ten times your current cash. While I did have over 4000 stores, I decided to wait till my customer base was a bit larger before IPOing. 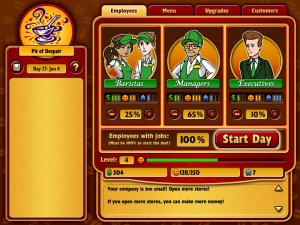 It also became clear that all the positive and negative random events are scaled to how much money you have, which makes them fluctuate with your success. Whether you've got money in the tens of thousands, or the millions, it moves in roughly the same way due to the bonus system, which makes them not only annoying, but discouraging. The happy equilibrium point when you're making money and gaining customers at a decent rate just doesn't exist. You can get to a point when you're doing both, but it's interminably slow. Some events just don't make sense, such as executives installing a jacuzzi that causes you to gain several thousand dollars, and some contain errors (right instead of write, and so on). Many of the events are just random snippits from customers, telling you how they will use the coffee to help them lift weights, or that they have a gold cup holder in their car. Since these are repeated so often they fail to add any life or character to the customers, and just clutter up the screen.

The upgrade system is equally pointless. Unlike in most tycoon games where the upgrades play differently, and so must be considered against each other, everything in Coffee Tycoon either gives you extra money, extra customers or extra stores. There is no real diference between employee benefits and a new type of coffee, or newspaper ads and a new espresso machine. On top of that, it really doesn't take long to get everything you can get on each level, then it's slogging though the customers until you can reach the next one. The real crime is that not only is it dull, but it's easy. You can gain customers and money if you're willing to spend a lot of time clicking the same two buttons, with only the reward of one of the two remaining coffee flavours to keep you going.

The Pit of Despair grew and grew, but the end of the game was a long way away. To finish it you need 1,000,000 customers, which by my estimates would involve playing the game for waaaay too long. I tried so hard to get to the end, but I just didn't have the mental staminar. I left my coffee empire tired and empty, crushed by the weight of long, boring hours of work that really didn't achieve anything whatsoever.

Recently, I watched an episode of 24 in which a character was subjected to a kind of torture that involved playing him a series of odd, irregular noises for several hours over headphones. Personally, I think the early stages of Coffee Tycoon works on a similar basis, and would have broken him a lot sooner. Perhaps this is an accurate simulation of the tedious world of coffee franchise ownership, where executives are utterly useless and the customers clich?d, annoying, coffee obsessed freaks, but I still don't want to play it. This is the kind of product that should never be tested on humans, animals, or even single celled organisms.