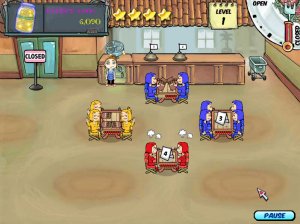 A great many of the independent games released are "inspired" by others. Often these are retro classics, or possibly mainstream console or PC titles, but fairly regularly the original game is an indie itself, as can be seen from the number of Bejeweled-esque games available.

Gamelab's Diner Dash has a marked similarity to Mystery Studio's Betty's Beer Bar, which came out some time before it. Both tell the stories of plucky young women who have decided to follow their hearts by entering the service industry. Betty is a farm girl with dreams of tropical islands, who has decided to work her way there from behind a bar. Diner Dash's Flo is a refugee from the corporate world, who is doing it for herself by opening a restaurant.

In each of the games, customers arrive and order a drink/meal, which you have to then serve to them. Betty must ensure her clientele have clean glasses full of beer, and the occasional coffee when they get too blitzed, while Flo needs to take orders to the kitchen, serve the food, and bus the tables after the customers have left.

This is all accomplished with the mouse, by clicking on the product (beer, food) and then the customer to serve them. The challenge comes from the rush of customers, and juggling the various resources available (cups for betty, tables for flo), in order to make enough off orders and tips to move up the Ladder Of Success. For the player the bill comes in at $19.95 for each of them, so which one should we be tipping?

The gameplay really is very, very similar. Diner Dash does have a little more depth, with the management of the queue being a big issue. It is much easier to wait on a restaurant full of people who are basically eating at the same time than it is to have people in different stages of the ordering process on different tables, so judging the time taken, and how likely the queuing customers are to leave is essential, since should someone leave you suffer a penalty. Betty's Beer Bar has a similar issue with the beer glasses, but since the number of customers has a limit by the size of the bar, it doesn't seem quite as significant as in Diner Dash. 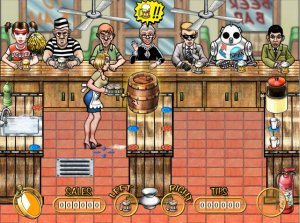 Diner Dash was also significantly less repetitive than Betty's Beer Bar, which required you to go through the same level multiple times until you earned enough to move to the next bar. When you've almost go enough to move it's very easy to miss your sales goal and get fired because you just want to get through the last tedious shift. Real waiters and waitresses may sympathise.

Despite being a the older of the pair, Betty's probably the better looking game. Betty's big, cartoony customers have a wealth of detail and character, while Flo's regulars tend to look exactly the same, differing only by colour and age, with a couple of specials thrown in. Betty's bar is richer and more detailed than Flo's various restraunts as well, though the short animation of the cooking chef is an excellent touch. This is not to say that the Diner Dash graphics are bad - the different faces of the customers as they get more annoyed and Flo's own expressions of boredom or happiness are effective, and add to the game.

The music at Betty's place got on my nerves, while the tunes at Flo's were just dull. I turned them both off, no score draw.

Betty's farmgirl roots really show through here, as Diner Dash knocks the stuffing out of Betty's Beer Bar. The menus throughout Diner Dash are cleaner, slicker and more professional, but that's a fairly minor point as you'll spend most of your time in the game. There again though, DD comes out ahead. The hit areas, especially for the customer just above the keg, are too small and easy to miss in BBB, and there is no chaining of clicks. What I mean by this is, if you are holding an empty mug, you click on the keg, then immediately on a customer, the last click overrides the second, and Betty walks up to customer with an empty glass. In Diner Dash, you can click on an order then immediately click on the customer and Flo takes the food, then goes to the customer. This sounds a little odd, but it just means you can play at your pace, and Flo catches up, and it makes a big difference.

In the end Dinner Dash has a level of polish that isn't quite there in Betty's Beer Bar. I found myself returning to Diner Dash, even after hitting a couple of tough levels that took a few attempts to complete. Perhaps this was due to the fact that each level varied slightly, which was something BBB was sorely lacking. Of course, I would recommend trying both demos, but I suspect you'll be going home with Flo.

(It's worth noting that Mystery Studio do have another, more recent, game along the same lines called Wild West Wendy, which is purported to have many improvements over Betty's, and may well be worth a look - though it does list "original country music" as a feature.)