Deeplinking Into The Google+ Apps

On Android, the Google+ app registers intent filters for (most of)the regular http://plus.google.com/* URLs. From version 4.4 of the Google+ iOS app, it also registers (again, most of) the web URLs, but with the custom gplus:// scheme. If you’re reading this on one of those devices right now, you should be able to try these out.

Actually using these from your app is straightforward:

On Android, the easiest way of starting out is to just fire an intent for the desktop URL, which the Google+ Android app registers a filter to handle:

However, because we’re using a regular web URL, the default action will be to give us a chooser, which is probably not the ideal result. 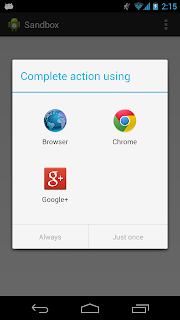 We can fix this by adding the package name to the intent, which will open Google+ directly:

However, if we do that and the user doesn’t have the Google+ app installed, they’re going to have a bad time. We can check in two ways: either by using the PackageManager, or (if we’re integrating the Google+ SDK) using the GooglePlusUtil that comes as part of the SDK:

For iOS, we can use the UIApplication class to test whether the Google+ app is available, using canOpenURL:, and then make a call to openURL: with the gplus:// based URL to start the app:

One small caveat is that only numeric profile IDs work on the gplus:// URLs, so make sure not to use a +VanityUrl if linking to a profile!