Developers, and other technical practitioners, don’t respond well to marketing.

As much as there is a developer-products truism, that’s it: developers don’t like to be sold to. They look at things technically, and come to their opinions rationally.

However, if you look at the cash flow for any developer-focused business, from IDEs to cloud services, you’ll will find line items for advertising and paid placements of all sorts: search ads, display, video, real world advertising, everything. So whats going on?

Part of advertising is raising awareness of a brand, and setting a core tone or message for that brand. An old rule of thumb in marketing is that it takes 3 independent touch points for something to seem “widespread” to you, and something big and visible like a billboard is a good way of doing that.

If you happen to have driven in or out of San Francisco, you may have seen this one: 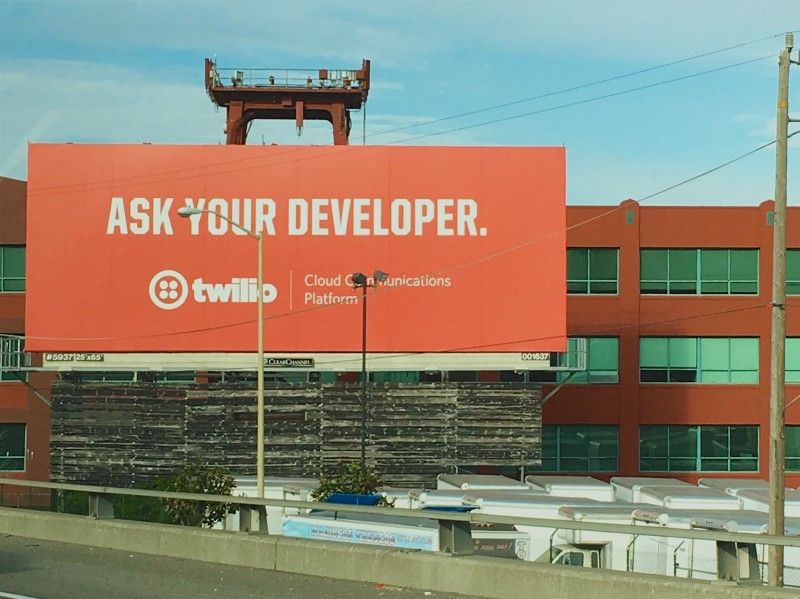 This billboard hits a few notes. Its clearly about Twilio, and you would get that even at speed (though this being SF, you wont be at speed). More importantly, it appears to be sending a message to technical executives that this tool (a cloud communications platform, whatever that is) is all over the developer community — which it was to some extent. Beyond that, its reinforcing to developers that they’re the smart ones that the business folks should go to.

Billboards aren’t the only place where you see this kind of brand building: it happens online too. Do developers response to online display? Some folks think so: The ad network Carbon primarily exists to target developers and designers, and is generally whitelisted in most ad blocking software. You see their ads running on popular blogs like A List Apart and Coding Horror.

The text of the ads is generally to the point, and the placement unoffensive. You see similar behavior on Reddit and StackOverflow: companies buying display to enhance brand recognition, and show alignment with the programming community in question.

To understand why you might pay for billboards and display ads, its important to understand what these ads are conveying. Developers, rightfully, think that they are not going to be influenced by an advert when evaluating a technology, but evaluation is just one step in the process of becoming a customer. There are a lot of models, but for business-to-business deals the process goes something like:

Developers are unlikely to be influenced in solution evaluation, but the other steps can be effected.

Lets look at the advert running on A List Apart as I write this, for Cloudinary. 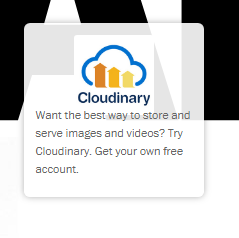 There is a very clear proposition here: this service helps store and serve media. The ad is telling people: “Hey, if you have been having problems with serving media, there are in fact services which are specific to this kind of problem”. There will be some percentage of developers who have rolled their own hosting, or used a generic blob store like S3 or Cloud Storage, who could use some extra functionality. That’s problem awareness: the problem you have is a known “type of problem”.

Secondly, the ad is saying that Cloudinary can help you with that problem — that they are a solution. This isn’t some subliminal message: its not trying to magically cause you to make a purchase, its just suggesting the product for evaluation.

The other, honest, factor of advertising is actually more about the purchasing process. In order to go from evaluation to actually getting out your credit card, or convincing your purchasing department to get out theirs, you have to be convinced of more than just technical efficacy. This is where, as developers, we’re often evaluating things that we don’t have expert eyes on, factors like:

Getting these wrong can really suck — investing in implementing something that gets shut down or abandoned can be painful for a team. It can lead to them not taking advantage of 3rd party services out of fear of the same thing happening, which ultimately hurts the team and product.

Advertising is a kind of signalling, just as how the patterns on snakes signal “I’m dangerous, stay away” without requiring the snake to actually bite you. In this case, running a big, expensive-looking billboard on the 101 or advertising on a top developer blog says “I’m a real business, I make money, I’m spending to attract customers — I expect to be around for a while”.

The same thing applies to purchasing teams. Its totally possible for a finance person in a large corporation to look at a name like “Twilio” and, being unfamiliar with it, deny the purchase or require extra scrutiny. If they’ve seen Twilio advertising, even if they don’t know what it does, the business has more credibility. People are busy, and they have to rely on heuristics for judging what is important or legitimate.

A well chosen campaign, whether online, print, real-world or other media, can signal credibility and build both problem and solution awareness, even if you can’t track individual purchases back to those specific ads.

Speaking of tracking, its worth a note on pay-per-click and other performance based advertising. These are one of a type of advertising that is designed to be directly actionable — you can click it and get somewhere. The traditional venues for these types of advertising are the big aggregators: Google search, Facebook’s stream, and so on.

That would all be lovely, but a high proportion of developers are going to use adblock software, and they are aware of the difference between paid and organic placements. This means you don’t tend to see as much use on generic terms for developer audiences: compare searching Google for “document database” (a somewhat developer-y term) to “cloud database” (which is more of a business-person approach).

This doesn’t mean these are a no-go for developer businesses — developers do click on ads, when the link is appropriate. Its not uncommon for companies to buy search ads on core brand terms both as a defense against a competitor buying on the term, and to funnel to a more niche flow than what might be their highest ranked page. For example, right now (for me) searching for “heroku” returns an ad that links directly to their new sign up funnel, rather than their general home page: 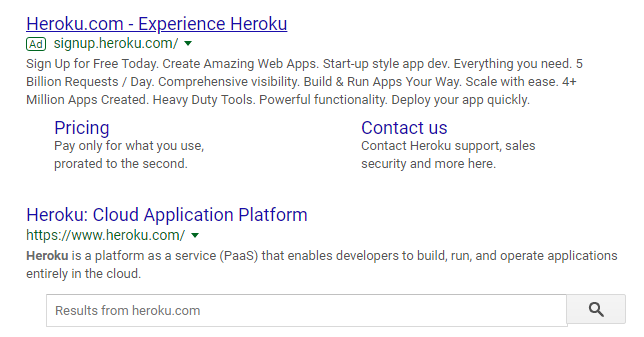 A really effective go-to-market for a developer product doesn’t discount advertising, but incorporates it appropriately and with a respect for the audience being advertised to. Its just one channel, and is best used when it complements other marketing techniques like direct marketing, sponsorships, content marketing and so on.

The perils of ignoring advertising are giving competitors an opportunity to do the kind of awareness and credibility building it offers in clear space . This leads to some slightly perverse outcomes where technically superior products fail because they just can’t generate the awareness or the large-company sales that their less technically adept, but more market-friendly, competitors can.

Aside: For those interested in the psychology of (particularly consumer) advertising take a look at Kevin Simler’s Ad’s don’t work that way, also covered in his excellent book Elephant In The Brain.