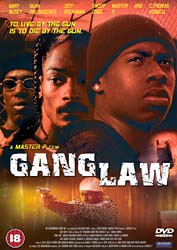 Who would let Percy "Master P" Miller direct a feature film? Well, PM Entertainment of course, and more than once. It is their 1999 colaboration "Gang Law" that is the topic of discussion today. As you may have guessed from above, Gang Law is actually the UK name, quite explicably replacing the US title: "Hot Boyz". Perhaps in the mean streets of the ghetto Hot Boyz does not sound like it should have .com appended to it and contain uses of the word twink.

As would be expected from a director who also happens to own a hip hop record label, many of the starring roles are filled by rappers. Silkk the Shocker takes the lead role as Kool, and Snoop Dogg, Mystikal and C-Murder all appear as supporting characters of varying importance. The actor contingent is filled with the sizable talents of Jeff Speakman, of The Expert fame, as a doughy martial arts teacher, as well as similar B-stand by C. Thomas Howell as half of the police dream team, and the human wine box himself, Gary Busey, as his mildly corrupt partner and lead investigator.

This cast lends an interesting balance to the script. While Slikk the Shocker can't act even a little bit, his scenes with Clifton Powell as excellent villian The Saint are roundly entertaining, as are his changing attitudes to Anthony Johnson's stuttering (and aptly named) pee wee. Despite these moments, the failure of the main character to be of any interest at all forms the failure of the movie. The story is, despite the maker's best attempts to disguise it, a character study, and a study of a fall into crime and violence. What was filmed often resembles a music video, presumably because of Master P's experience in that area, but the action isn't good or spectacular enough to overcome the shaky foundations it is built upon.

In essence the plot of the film goes as follows. Kool, a young man from the bad part of town, is powerless to help when his girlfriend is framed by a crooked cop. To try and get her out Kool agrees to go undercover to help a detective named Tully make his case against Saint, the gangster Kool knows had the cop in his pocket. However, once his girlfriend is killed in a savage beating from the crooked cop, Kool goes renegade, starts his own gang, and muscles his way to the top.

While this story underpins the movie, it is hidden in a sea of action scenes and Profound Moments, mostly featuring the main character, which are sort of randomly distributed across the movie. Starting (and ending) with an above average car chase through a dock yard, complete with a full complement of trashed police cars, the movie has drive-bys at funerals, gun fights in drug factories, punchups in nightclubs, and Jeff Speakman getting annoyed. There is nothing particularly wrong with any of these scenes, nor really any of scenes in the movie beyond Silkk's limited range, but there little cohesiveness, and very little happening elsewhere in the world they have created to drive things along. The last third of the film, showing the Hot Boyz taking over the city, is compressed into a sequence of shootouts, drug processing, and money counting, but still has no energy. It's almost a time-lapse shot of the take over, informing us of what happened but not describing the effects it has had on the people involved. By the time we catch up with the crew they've have turned into stereotypical gangstas. While this is reasonable for Snoop's character, whom we never really developed any real knowledge of, Silkk's character bears no resemblance to his earlier incarnation, which means whatever empathy the audience could have developed is immediately lost.

Gang Law is one of those movies that should have skipped out of the bargain bucket of doom most PM movies are destined for. It has some names in the cast, a decent soundtrack (despite one of C-Murder's lines being repeated ad infinitum when in establishing shots), good quality action scenes, and the makings of a compelling story. The problem is that it's all about identifying with Kool, and he doesn't make it easy. Combined with the fact that the case against Kool's girlfriend was so flimsy that a small piece of cheese with a stiff stench could have got her out, the film ends up feeling somewhat unmotivated and flat.

Overall, Master P's attempt at a ghetto story could have come off far worse, but it pales when compared to Ice Cube's films. It even looks a bit shaky next to Ice T's, and he's in Players.