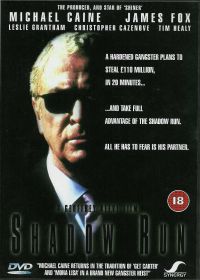 This movie is not, in any way, cyberpunk.

Shadow Run a crime thriller without much in the way of thrills, or a gangster movie without much in the way of characters. Michael Caine plays Haskell, a suave but amoral criminal who has been hired by the aristocratic Landon-Higgins, played by James Fox, to steal some specially made paper. The paper is used for printing money, and is the key element in making undetectable forgeries. Of course, the security is rather tight, with the weakest point being an armoured van that follows a computer controlled route from the factory. The van is still no easy pickin's, and Haskell's initial attempt fails, leaving blood pouring from the van, but no way in to get at the ?100 million worth of paper inside. This is where we come in.

To be precise, this is not where we come in. We come in with a fat kid. Now, I have nothing against fat people, or kids, or even fat kids, but the sight of a large-and-in-charge pasty skinned 13 year old huffing his way across the country side in his PE kit and NHS glasses is just not the way to open a movie. I simply could not imagine, say, a Bond film opening with a pumping David Arnold theme over elegant visual effects involving guns and curvaceous ladies being overshadowed by the cinematic value of a puffed out salad dodger. The name of the jogging giant is Joffrey, and he's played by a young actor called Matthew Pochin who did not manage to spin his performance in Shadow Run into a career, so far at least.

Joffery happens upon Haskell just after the failed attempt on the money van. To keep him quiet, Haskell gives him fifty quid and tells him to keep his mouth shut, presumably because he was a little tired and couldn't be bothered to hide, or move, the body. Joffery immediately goes back to his public school and tells any and everyone he can find about the incident. Luckily for Haskell it seems that Joffery is as fond of telling porkie pies as he is of eating them, and is believed by no one. Through out the rest of the movie the kid pops up occasionally in a fairly unnecessary way, but most of his screen time is based around a sub plot, if it can be called that, about his fairly unhappy life. See, Joffery's father was a criminal of some kind, and he is picked on by the rich kids at his school, partially because of that, partially because he is fat, and partially because he can sing better than them, as they are all choirboys. At this point, everyone with some level of higher mental function has given up on caring, but we still get to experience the boy's highs and lows as he journeys through life, surrounded by his equalling annoying child co-stars. Moving on...

Back at the ranch, Haskell's plate is full. Landon-Higgins doesn't exactly trust him, and the feeling is mutual, he's had to kill an old friend for something or other, and he still doesn't have a way in to the van. Various people proceed to pop up in the plot, first TV's Rae Barker as Julie, a hooker that serves to be an attractive female with some lines. Next, the ever so experienced Ken Colley appears as a driver for the paper plant who has been retired off due to health complications, named Larcombe. With a bit of fiscal persuasion and a night with Julie, Larcombe spills the beans on the van's systems. It seems that the computer that controls the van's route, and sets off the alarm bells if anyone tries to rob it, communicates with HQ via the mobile phone network, and it just so happens that theres a large patch of no signal very close to its route. So close, in fact, that on occasion road closures have forced the van to go straight through it. This area is known to the drivers as "The Shadow", and hence their trip through it "The Shadow Run". Haskell seizes the opportunity, and quickly assembles a gang. The gang mostly consists of some people that don't have any lines and craggy faced villian Leslie "Dirty Den" Grantham, playing Liney. Together they plan, and execute, a predictably violent heist and pretty much everyone dies. Apart from the fat kid.

This film is quite disappointing for a number of reasons. It lacks pace, but in a way that still involves a lot of things happening. The problem is that the vast majority of those things simply don't matter, especially the entire Joffery storyline, and they just bog the movie down. Still, that could have been excused if there was a quality to the writing that made it worth taking your time, but it simply isn't there. Caine, Grantham, Colley and Fox all put in good performances, but it's just throwing rocks against a tide of torpid boredom. Haskell, particularly, is a massive missed opportunity. Michael Caine can play a gangster, we've seen it numerous times, and that experience is evident is his performance, but the shallow, violent nature of the character just doesn't gel with it. How such a man would still be operating acting as he does is hard to imagine, and it is impossible to integrate his actions throughout the movie into a believable whole.

Possibly even more disappointing is the treatment of the core plot elements. The heist itself should have been a good one, a decent target, an interesting solution, and the kind of value that causes a lot of fractious thoughts on the part of the individual thieves. The relationships between the characters had some value too, primarily that between Julie, the hooker, and Haskell. There was a sense of understanding between the two characters that was wasted in service of the film's tone. Finally, the tension between Haskell and Landon-Higgins, while not exactly an original bit of writing, had the potential for some great screentime with James Fox and Michael Caine sparking off each other, but Fox was hardly in the movie and so apart from some brief scenes it just didn't happen.

If you want to watch a British gangster movie in this mould then try Get Carter, The Long Good Friday, or one of a hundred others. Shadow Run doesn't have the laughably bad special effects or true incompetence that could make it enjoyable in an MST3K kind of way; it is simply leaden, heavy handed, tat.

If you're insane, or an excessively dedicated Michael Caine fan, the movie is on Amazon, as well as at the finer pound shops.