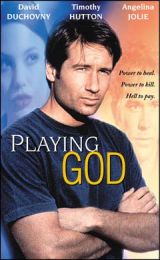 As you can see, the plot is the selling point.

Unlike most of the movies that grace these pages, Playing God is actually quite well known. This shouldn't really come as a suprise, given the star presence of David Duchovny, in 1997 at the height of his X-Files fame. Names like Angelina Jolie and Oscar winner Timothy Hutton also provide some buoyancy. It does beg the question how this film ended up in the siberian gulag of poundshop DVDdom, a fate that, perhaps, it doesn't deserve.

Outside of the big three, there are a host of semi-notables in the cast. The brilliant Peter Stomare, doomed always to be "that guy in Armageddon" plays a russian gangster named Vladimir, which does not stretch his abilities particularly, and Gary Dourdan from CSI pops up as Yates, one of Tim Hutton's thugs. There are a number of "Hey, it's that guy"s that pop up, which could prove for some form of entertaining drinking game.

But, while we're all still sober, to one of the less important parts of the movie - the plot. Duchovny plays Eugene Sands, a disgraced ex-surgeon, and drug addict; the latter leading to the former. During one of his regular visits to a shady drinking establishment to purchase some illegal substances two gun men burst in and proceed to shoot a gentlemen enjoying a drink at the bar. After the bar owner nixes the idea of calling for an ambulance, Sands' instincts kick in and he performs a makeshift operation, saving the wounded man's life. Of the bar patrons assisting him Angelina Jolie stands out, as you would expect, as a beautiful girl called Claire, who seemed to know the victim. Sands goes home, mixes some narcotics with his healthy glass of milk, and crashes. Next morning he awakes in a car being taken to to meet gangster Raymond Blos2som, played by Tim Hutton. Claire turns out to be Blossom's girl, and had impressed him with the tale of Eugene's work the previous night. Blossom offers ten thousand dollars for Sands to operate on a man who is set up in the middle of the hotel room complete with all the medical equipment you could want, and nurses. Sands eventually agrees and ends up becoming Blossoms go to doc, and in a slightly strange way, his friend. Of course, things do not continue smoothly as Blossom breaks off a relationship with the russian mob in order to get in with new chinese partners. The russians object to this deal, and express their displeasure with a few hits on Blossom's crew, attracting the attention of the FBI. At the same time, Sands finds himself falling in love with Claire, and getting increasingly addicted to the rush of his new occupation.

It's tough to decide whether the film is affected more by its bad points than its positive ones, since there are significant examples on both sides. For the first fifteen minutes or so of the movie, however, the negative is most certainly accentuated. The first, and most vocal, of the problems is Duchovny's voice-over, which provides a running semi-noir description over the top of the less action packed parts of the movie. While Duchovny's dry delivery does afford some truly amusing moments, and some choice one liners, in general it just feels cheap. There are some poorly considered scenes scattered through out as well, a prime example being during the car ride where Sands is being taken to Blossom for the first time. The two thugs, one white, one black, discuss the differences between american football and soccer, which in a film that often inspires unfavourable comparisons to Pul Fuction perhaps wasn't the best choice. Similarly, at one point Sands decides to get on the wagon, and get off the horse, to mix some metaphors. This is achieved remarkably smoothly, despite one amusing moment of being caught drinking cough syrup, which doesn't really balance with the rest of the film's reality that was otherwise consistent, if not entirely accurate, in its drug portrayal. The drug addiction also invites a number of cringe inducing addict clich?s and lines.

This is a general problem with the script though, elements of which are by far the weakest points of the movie. There are quite a few cheesy moments thrown in for not much payoff, and the dialogue often relies on a rather better than average delivery to make it palettable. David Duchovny and Angelina Jolie don't help much with some distinctly listless acting at times, mostly when they're not working with each other. This, to be fair, shouldn't come as much of a suprise, and Duchovny at least has always performed far better working off other strong actors than on his own. British director Andy Wilson falls over a little on some of the, fairly sparse, gun sequences, but for a first feature makes a decent attempt. 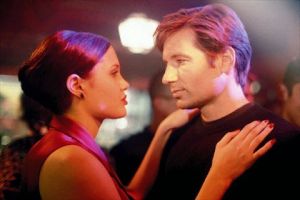 At other times, the writing seems really spot on though. Sands comes across as a compassionate man, and in fact all the main characters seem to have likeable elements, a more positive link with Pulp Fiction. There are some well played comedy sequences, such as a scene of Sands running through a hotel, trying to save Claire, and going back and forth with an FBI agent over a walkie talkie, in another one of Blossom's mooks get killed in his car to the sound of the Bee Gee's Jive Talkin' from the tape player, or in a third an addled gangster waves a gun in Sands' face, yelling at him to make his dead friend Jewish, so that he can avoid an autopsy. Even on the action front the final chase set piece is entertaining and well executed, if a little poorly motivated, making a good show piece for the director.

This isn't really a film where the story is the key element. The characters of Blossom and his henchman work so well, and Tim Hutton in particular puts in such a brilliantly off the wall performance that you are at times swept along by people that are fundamentally likable, while at the same time quite twisted. Even the two psychotic surfers that Blossom farms out some dirty work to have a human side that is endearing, even if the characters as a whole are not.

Duchovny and Angeline Jolie work especially well together, there's not a lot of passion in their relationship, but it still seems significant. Duchovny's detached, sardonic humour lightens the film, which certainly has the potential to turn very dark and serious, and contrasts well with Jolie's in-the-scene intensity.

One of the problems that Playing God suffers is that it is expected to be that it is not. It is not an action movie, and it's not Pulp Fiction. It is a crime movie, but it's not a movie about crime, and it's not about spectacle. Unfortunately, the film itself seems confused about this, and I get the feeling that if the script had ended up in different hands it could have been an almost unrecognisably different experience. This leads to a very variable movie, and unforunately the start is not one of the strong parts. This, I think, will leave some viewers with a bad taste for the rest of the film, which is a shame as overall I think there are enough good elements to make Playing God worth a watch. Certainly Duchovny fans should see it, but I think any one that's willing to give a movie some leeway will find something entertaining in there.

Amusingly, the official review of the film on Amazon refers to, err, Deep Space 9.