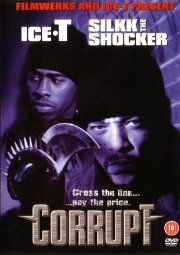 Gangstas and incompetently run pie shops, what more do you want?

It's rare that you're watching a movie and are forced to check that it was in fact directed by Albert Pyun because it's so awful, but Corrupt inspires exactly that reaction. It's short, clocking in at less than 70 minutes, but don't let that fool you into believing it's a taught, pacy affair. Instead imagine a world of flame throwing gangstas, bin-hiding hoods, and of chip shop operators that get involved in the murky, high-stakes games of drugs (I think) and bizarre haircuts (for sure).

MJ (Silkk the Shocker) is a young up and comer in a tough, yet generic, inner-city environment. Corrupt (Ice-to-tha-Tizzle) is the drug lord that rules aforementioned inner city environment with an iron fist, with the assistance of his right hand, right eye, number 2, Cinque (TJ Storm). MJ and another hoodie rob a poorly defended stash house, taking three bricks of finest intended for Corrupt, in an attempt to break out of the cycle of drug crime and violence that grips their lives.

To be honest, up until the robbery things were going OK for this film. There were some shots of a guy messing around on a bike, some vaguely menacing Ice-T time, and the heist itself. It started to go down hill about the time Corrupt went to confront his connect, who sported one of the most bizarre haircuts I've seen outside Sigue Sigue Sputnik. It was a sort of side pony tail, which would be bad enough, but was unaccompanied by any other hair leaving some sort of hair tentacle growing out of the side of his head. He also spoke in what sounded like a deeply dodgy Jamaican accent, so enraging Ice-T he actually burst into flames, incinerating Sidepony, before throwing fireballs at Sidepony's henchmen and leaping out of the window. 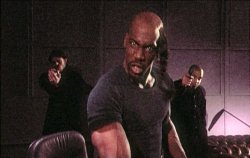 Luckily, being that Corrupt was several stories up, his suport team were passing in a truck with fire extinguishers at the ready. With some off screen detective work, Ice-T twigs MJ was involved in the caper, beats up Lisa, MJ's girlfriend, and goes to hang out at the pie shop where MJ's sister (Jodi, Karen Dyer) works to see if he can worm MJ's location out of her, and himself into her pants.

In much the way that the dodgier modern action films tend towards being a plotless collections of stunts, this movie tends towards a plotless collection of bizarre and improbable scenes. Two of my favourite characters are credited as The Sayer and 'Snackbar Dude'. The Sayer is an apparently homeless guy that turns up in the pie shop, calls our heroine Jodi a 'fly ass bitch', and gets his pie gratis, in what is the only succesful (though unprofitable) transaction the snackshop actually has.

Snackbar Dude is the source of most of the other, failed, transactions attempted in the movie. His lengthy initial attempts to buy anything are met with disappointment, to which he responds by squirting tomato ketchup all over the place, gangsta style. His second attempt results in some food, but instead of the number five he has ordered, he receives a number two (not a euphemism). Snackbar Dude lodges a protest with the management, but only receives a swift elbow in the face from Miles, Jodi's better half, who happened to wander in. You'll be pleased to learn Snackbar Dude does order a burger at the end of the movie, but unfortunately whether or not he gets it is left as a question for the sequel. 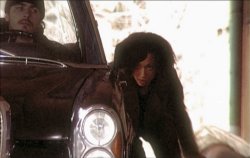 One fine example of the work of the many, many lineless extras comes when Jodi is trying to sneak into the mob courts where MJ is awaiting his mob justice. She slips around the side of Corrupt's limo convincingly, and the driver clearly had instructions not to look in his wing mirror, lest he should notice the sneaking and disrupt the viewer's suspension of disbelief. He tries valiantly to stare in every other possible direction, but just can't hold out and has to get a glance in, right at the end of the shot.

Speaking of extras, there is also a rather poorly filmed, but massively overpopulated, shoot out at the climax of the film, during which pretty much every character gets shot and Ice-T justifies his fee with some wonderful expressions. Do stay for the credits though to see the approximately 6 speaking roles and the ridiculously large number of stunt men who were presumably used in the final gunfight.

Other than Silkk and Ice, most of the cast are mostly smaller players. Karen Dyer has a reasonable number of credits, though on her IMDB page there is the notice that she also performs as burleque artists Eva La Dar. One of the more interesting careers goes to Tahitia Hicks, playing MJs fairly mental girtfriend Lisa, whos acting career stops with this film, but from 2003 she has a number of camera and cinematography credits. I would make a crack about Corrupt killing off her future as an actress, but on balance I suspect it would be more likely to be a case of  'even I could do better than that'. 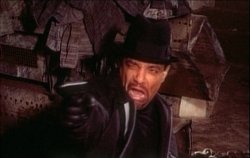 On the backend, the main name is of course Albert Pyun, one of the heroes of the modern B movie. The writing talent comes from Hannah Blue and Andrew Markell, names I haven't previously encountered. They technically have three credits with the great one, as, in a grindhouse sort of way, this movie was originally part of a greater whole.

There are two other films, Urban Menace and The Wrecking Crew that make up the other parts of Pyun's street trilogy, and judging from IMDB all were equally well reviewed, and all somewhat trimmer than the average movie.

On the positive side, the picking are slim. Ice-T puts in a pretty stallwart performance, and often appears to be wearing his SVU standard outfit (including hat) so Finn fans should be pleased. Silkk the Shocker gives what could be called a natural performance, only fluffing his lines once, and Karen Dyer makes a mostly not half-hearted attempt at the dialogue. And it's pretty short!

Sound track fans will enjoy the 2 ice-t tunes that seem to be repeated through out, and I believe the box claims an isolated music score, though I couldn't actually find that on the DVD after a superficial examination. There was an entertaining quiz (tip: note all number plates you see in the film), though clearly the DVD developers expected no-one to finish this, as whle there was a 'you got caught slipping' failure screen, winning just returns you to the menu, making it more of a moral victory.

I can only imagine this film being of significance to Silkk the Shocker or Ice-T completists, and I really would question whether Albert Pyun even turned up, bar a couple of shots. That said, I actually can't think of any other movie where Ice-T spontaneously combusts, and I would be interested to see if Urban Menace and The Wrecking Crew bring this series to something greater than the sum of its parts, or just drive my dvd player to self immolation as well.