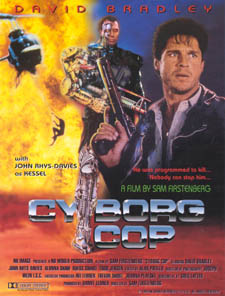 He is in fact wearing one of those Steven Segal vests under there.

Cyborg Cop. Is a cyborg better than a robot, or a "Robo"? Perhaps. Is Cyborg Cop better than Robocop 1, 2, 3 or that weird series with his magical inter-web pixie friend? No. That is not to say however that it is not worth watching.
Our story focuses around one man, who is neither a cyborg or a cop, but was once the latter. His brother goes missing on a mission for the DEA, in some Foreign Place full of Foreign People who are ruled with a drug filled fist by the fat guy from Sliders, who you may recall more recently as Gimli in the Lord of the Rings movies, John Rhys-Davies. Rhys-Davies goes under the villianous name Kessel, though I doubt even the falcon could get round him in just 12 parsecs.

Kessel is manufacturing cyborg super assasins, as were many drug lords back in '93. Personally, I think he missed the boat a bit, as surely something as sophisticated as his cyborg tech would have had lucrative medical applications, but evidently villians don't think that way. Anyway, our hero, David Bradley, goes off to rescue his brother, picking up an Attractive Female Reporter on the way to find out what happened. Martial arts ensues.

As tat goes, this is of the better variety. The pacing is acceptable, the banter is occasionally witty, and the star has a cool kung-fu style. On the other hand the film starts off on a fairly hardboiled cop/military tip, but after the girl appears in the picture gains the air of a comedy action picture, and sort of flip flops back and forth as required. Rhys-Davies utilises a deeply crazy accent to good effect, but his robot henchment look like rejected Gary Numan backing singers, and appear roughly as threatening as successful Gary Numan backing singers. Oh, and the ending is a bit rubbish, but I think it is our duty To Cinema to judge things as a whole, rather than just on the last five minutes.

Overall, Cyborg Cop is better than Beverly Hills Cop 3 , but worse than Police Academy 4: Citizens On Patrol, and you can't say fairer than that.