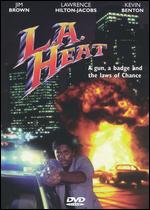 The german cover has boobs.

First things first, this movie generated two sequels and (kind of) a spin off series, which proves that miracles can happen. Secondly, this is the first appearance in this mighty organ of a film by Joeseph Merhi and Richard Pepin, AKA PM Entertainment, a veritable powerhouse of direct-to-video movie producing genius. They are responsible for bringing us many, many terrible movies, and some rather better ones in the later parts of the ninties, including the non-Bruce Willis starring Last Man Standing. This, however, was their first film to star Vaguely Famous People, specifically Lawrence Hilton-Jacobs and american football legend/star of the screen Jim Brown.

Now, Mr Merhi has a fairly decent directorial style, and it's always nice to hear the directors opinion on a film they've made. However, and I mention this mostly for the advantage of Hollywood DVD, I don't want to hear the director during the film. Hopefully it's a simple SNAFU with my copy, but for some reason at various points you can hear essential comments such as "walk over to the fridge" and "cut, no keep going, keep going, keep going, good" coming somewhere off camera. Mostly this seems to be the fault of retarded editing, as there are also bits of overlapping dialogue.

With cop movies, it's not about the story per se. This one involves a drug dealer named Clarence, a badge on the line, and a girlfriend in peril, which, bar the existence of a drug dealer named Clarence, should be familiar territory. The important thing in this kind of movie is the cop's quirk. Clint Eastwood was slightly to the right of atilla the hun, Mel Gibson had a deathwish, Bruce Willis was burnt out, and Michael Winslow made funny noises. Lawrence Hilton-Jacobs as Jon Chance wants to be a cowboy, as demonstrated in various dream sequences of him, suprisingly, as a cowboy. Unfortunately, he hates violence, and hence deams of himself as a fairly sucky cowboy who gets shot by an indian with furry boots, which is the worst kind of indian there is. His dreams play themselves out, as his partner gets iced by the aforementioned clarence, and Chance has to find a way to make things right, while maintaining his principles.

Jim Brown, to be fair, makes a superb Angry Black Police Lieutenant. He ups the quality of every scene he's in, and makes the film almost seem like a proper movie. Otherwise, the acting is about what you'd expect, ranging from believable to "look that way and say this". There are some fairly amusing side characters, including some good sarcasm from the other pair of detectives, and top class professional stage fighting by a pool hustler near the end.

The end of the movie was not, however, where the tale of Jon Chance ends. He would return, again played by LHJ, a year later in '89 in L.A. Vice, then once again in 1990, this time with Hilton-Jacobs himself taking the directorial chair for Angel Of The City, though this is only according to IMDB, as I've never seen it. Most interestingly, in 1996 PM created two series of L.A. Heat for television, starring regular PM cohort Wolf Larson and going with the ever-wacky black cop/white cop combination.

With regards to this version, L.A. Heat is not really any good whatsoever. However, there is a girl in an utterly ridiculous outfit withint the first ten minutes, and if you get a chance to hear the version with the random directors comments then that's worth something in itself.

I don't care what they say upstairs, I'm a damn good cop! You don't have to kill to be a good cop - Detective Jon Chance