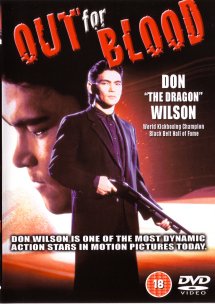 Don Wilson is one of the most dynamic action stars in this image.

Don "The Dragon" Wilson was 3 time world kickboxing champion. He featured, both in name and in person, in Cameron Crowe's Say Anything, where he kicked John Cusack in the face. Other than that and a brief appearance in Batman Forever, Don's screen career has focused on the world of direct to video. Always working, often for the people like the infamous Roger Corman, and various PM related groups, Don had starred in ten films in the four years of career leading up to this 1993 Richard W. Munchkin chaired slice of martial arts amnesiac action.

Munchkin is a common co-conspirator with Mehri and Pepin, that latter of whom filled the roles of both producer and director of photography on the movie. Other than Don, the cast includes anime-english-dub voice over regular Beau Billingslea (Jet in Cowboy Bebop) and Aki Aleong, ever popular old chinese guy for-hire.

"The Dragon" plays John Decker, lawyer and happy family man until the day his wife and son are cruelly murdered by a Psychotic Drug Gang©. Unfortunately, the events traumatise Decker to the point at which he can no longer remember what happened, only seeing glimpses in dreams and flashbacks. The law is unable to catch the villians, and so Decker decides to reap his own vengeance. Quickly dubbed Karateman by a media unaware of his true identity, Decker cleans up the streets one villian at a time. Frustrated and unable to get their push their products thanks to Karateman's actions, the local crimelords make a deal with some dirty cops to ruin his reputation, and make him a wanted criminal himself.

His only allies are a lady art dealer (Shari Shattuck) that provides the love interest, as well as a jealous ex-boyfriend with accompanying heavies, and the wise old chinese artist she has in residence (Mr Aleong, of course). Aleong in particular helps Decker deal with the guilt and turmoil he is feeling about his Karateman alter ego, and the fragments of his familiy's murder he is remembering, in a way that his psychiatrist was failing to.

Despite the less than awe inspiring moniker, Karateman does indeed kick some bottom in this film. The action is frequent and always entertaining, with Don giving an excellent performance throughout. The film is utterly, utterly littered with clich?s, to the point at which it is a case of suspending your disbelief that the scriptwriters actually churned this stuff out. The move doesn't so much skirt predictability but settle into it like a comfortable chair, and the only people who are likely to be suprised by the unfloding events are those that haven't seen an action movie. Ever.

However, the villians are villianous, the hero is heroic and there are plenty of fights, explosions, and man-on-the-edge performances from Wilson. The biggest crime in cheap action movies is to be boring, and while there are slow sections this movie isn't that.