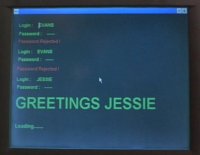 Artificial Intelligence on a Global Scale.

The tagline for this movie reads "Nuclear Terrorism On A Global Scale". This raises several questions, such as "what is local nuclear terrorism?", or alternatively, "does it really count as global when the action is set pretty exclusively in the USA bar a bit of terrorism in switzerland at the end, which was a) by our hero, hence not terrorism and b) not nuclear?", which is a pretty long winded question. The saddest thing of all is that we may never know the answers.

Warhead is a retread of one of the classic direct-to-video plot lines. A terrorist organisation (the United Patriots Movement) nobbles a bunch of special forces, and gains control of a Very Big Bomb (the titular "Warhead"). The sole survivor of the aforementioned spec. forces team is sent in to stop them, after clashing with his boss because he played by his own rules, was a loose cannon, and possibly a man on the edge. WHO WOULD EXPECT that the terrorist leader and the man sent to stop him were in the same class at commando school, and hence know each others strengths, weaknesses, and haircuts.

Our hero is Jack Tannen, played by the mighty Frank Zagarino, who you may know from... well nothing really, but he has done voice work for a Command & Conquer game which seems disturbingly common amongst actors of films I watch. The villian is Joe Lara, who would meet up with Zagarino again in '99s Strike Zone, '98s Armstrong and '97s Operation Delta Force, quite possibly sporting the same Goatee Of Evil in them all. The fiesty female lead goes to Elizabeth Giordano, who popped up in a couple of episodes of PM's L.A. Heat series, and the award for best acting in the movie goes to the big green crashmat that leaps into the air when Zagarino lands on it during the final fight sequence.

Lest you think this is a clich? ridden, formulaic procession through an obvious storyline, there are some scenes which are unique to this movie. For me the two standouts are: 1) The hack-off between Dr Evans and his scientist daughter Jessica as they arm and disarm the warhead with complex commands like "Destination Washinton" and "Destination Override". 2) The ice hockey scene. In this masterpiece of action several armed goons come after Zagarino, and they mix it up from one side of an (in-use) ice hockey rink to the other. Faced with a lack of traction, Jack Tannen grabs the belts of various players who pull him around to escape or attack the villians. Even when several of their number have been shot by the thugs, the players still seem willing to skate around aimlessly to allow Zagarino to get a good tow, or on one occasion a sling-shot straight into the porky Patriots. A true classic, and worth the price of admission on its own.

Warhead was reasonably entertaining, and the sparking hot ActionChemistry between Lara and Zagarino has prompted me to pick up another of their films, Armstrong. The violence is full on and paced to the music, and while the characters are stupid they are all stupid to the same low level, which gives the movie a sense of consistency. Like watching primary school kids put on a play Warhead is not really any good at all, but it gives Mr & Mrs Zagarino something to tell their friends about when they're asked how little Frankie is doing.