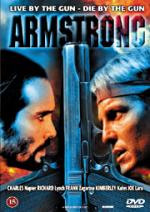 Only one of these men is Tarzan.

This movie looks like it has everything. Sparking Zagarino/Lara action, one of the Princess' from Bill & Ted getting her norks out, bad-ass-old-military-dude for hire Charles Napier and brilliant blonde-weirdo for hire Richard Lynch. Stick it all in Russia, add some obvious stunt doubles and you should have a sizzling slice of b-grade entertainment, but it just doesn't work.

In some movies Kimberly Kate's extended nudity/wet t-shirt (and magically appearing trainers) chase scene would be considered gratuitous, but in the slow, uninspired world of Armstrong, it's absolutely essential. The same can be said of Lynch's cavorting with hookers in his I'm-a-bit-corrupt bar scene, and that isn't the hallmark of a film worth watching.

For what it's worth, the plot centers around Lynch's Colonel Zukov, who is involved in selling russian nukes with the aid of the american and russian mafia. Zagarino (as the titular Rod Armstrong) is employed by Zukov to train his men, having been a former CIA agent and seal, after proving himself able by breaking through the incredibly tight security formed by one man and a window to assault a mock treaty signing. Armstrong is expensive, but that's because every time he goes on a mission he expects to die, though unfortunately for this film at least, he never does. Zorkin (Napier), Rod's old boss, comes to visit with a never quite explained plan that almost certainly involved showing the tape he has of some soldiers joyriding a nuke around moscow to Armstrong, and/or someone that could actually do something about it. When Zorkin is bumped off by Joe Lara and his russian mob cronies, Armstrong knows that he has to save the known world by stopping the mafia's evil plan, and of course get into the extremely hot Mrs Zorkin's knickers. Will he succeed?!!!?!!?/?!!!1!?
Yes.

The world of direct-to-video always stretches credibility, but Armstrong twists and breaks it apart like the cheap toy it is. Grenades explode in a orgy of undamaged furniture, throwing fat men out of windows that mysteriously turn into Zagarino just before impact. The script throws clever solutions to every problem, such as Armstrong stopping a nuke countdown by shooting a load of computers with a AK47, or busting in to a base by driving a truck through the gate. While the truck through gate idea is not a problem, his bizarrely setting the top of the cab ever so slightly on fire, to the point at which it looks like someone has strapped a '70s gas effect electric fire on it, made about as much sense as, well, the rest of the movie.

There are worse films in the world, and I think almost anyone will appreciate the comedy in Joe Lara's delivery of the trite and tired dialogue, but if you're looking for more than laughable lines and Kimberly Kate's fetching figure, then you can do better than Menahem's 35th feature. Armstrong is most definitely less than the sum of its parts.