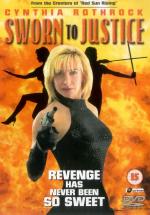 Cynthia Rothrock has a license to blonde.

According to the font of movie trivia that is the IMDB this film was known in the USA as Blonde Justice, which is a far superior title on the grounds that "Sworn To Justice" means not a lot, and that the concept of Blonde Justice is generally amusing. The blonde in question is of course the legendary Cynthia Rothrock, 5' 3" of high kicking action wonderfulness, but in this film she's not just a martial artist she's also... psychic. A psychic psychiatrist specialist witness, to be precise, called Janna, who goes on a restrained rampage of reasonable revenge after her family are killed by Criminals.

Being the family member of a martial arts star seems about as sensible as being Bond's girlfriend. In this case Janna's sister and niece were housesitting for her when they were killed in a robbery - the villians having assumed the house would be empty. Why, exactly, they were robbing the place was a little beyond me, but the punch bags were probably worth something. Janna is haunted by their deaths, not helped by the fact that she sees the events replay in her mind whenever she touches a small amulet her sister was holding during the deed. Determined not to let herself by overwhelmed she goes back to work, but now her abilities seem to be manifesting themselves everywhere. As she sees crimes occuring she steps to stop them, while at the same time searching for the villians that did in her sister, who have not been idle themselves. It seems they all fall under the purview of a recently released gang boss who is taking over with the help of an anonymous Official. During one shakedown at a chop shop, the boss uses the persuasive technique of the heated nail clipper under the nail, which showed flair and innovation in the field of inducing cringes from the viewer. Suppported by the man known only as The Man, they find that the only thing that stands in their way is an unknown vigilante. And her heels.

The cast is nothing special in the main, with some of the most recognisable figures turning up in almost cameo roles. Walter Koenig brings his experience as B5's amoral psychic Bester to bear, and sports a ridiculous accent, as a psychology professor investigating psychic phenomemon that Janna consults about her burgeoning abilities. Still on the trek tip Voyager's Brad Dourif has plenty of experience playing nutters (starting with Billy in One Flew Over The Cuckoo's Nest of course) and pops up in court putting in a top notch performance as a defendant whom Janna is providing expert testimony for, but who was also involved with the gang that killed her sister and niece. Of course, this is a martial arts movie, so we're going to need a few asians, and the go to guy is clearly the voice of Aku himself, the mighty Mako, as a wise, blind, news-stand owner.

On the subject of martial arts, it would seem appropriate to mention that the fight scenes are pretty durn good. The movie ranges in tone, on the lighter side is a brilliantly comical bit of vigilantism in the storeroom of a shop against some hoods who are attempting to rob it, which features sarcastic and quite random comments from the clerk ("oh, I remember the combination now!"), cheesy latino music, and a beautitful bit of duct tape imprisonment to put Jet Li's Romeo Must Die plastic tie scene to shame. On the other end of the scale Janna's fight against her sister's killer is short, violent, and fatal. It's so different it could be from another movie. Even during the relationship between lawyer/tai-chi boyfriend Nick their inevitable bout of sparring is played with a light touch by both actors, leading to a remarkably good scene that feels like nothing else in the movie.

That said, whichever angle the film approaches the fight scenes from they work well. Outside of her Hong Kong movies Sworn To Justice features some of Rothrock's best scenes, martial arts wise. The problem is that there are simply not enough of them. The film drifts by on a sea of melodrama, not entirely helped by soap opera like plot twists, and soap opera level acting by some of the cast. It features two sex scenes, both of which were pretty good, and fairly revealing, but neither of which was really necessary, and mostly served to bog down the already slow story. Janna's psychometric abilities were entertaining, and could have formed a core part of the plot, but really served as little more than a vehicle for getting her to the crimes, which could have been done by more conventional means. This is the kind of film that it is easier to be kind to in hind sight than at the time, as the bland sections are simply not worth remembering, so you don't. This doesn't mean the dramatic sections are all bad, Brad Dourif's scene in which his character is interrogated by Janna is fantastic, and one of Rothrock's finest performances, but this is the exception, rather than the rule.

Sworn To Justice is a hard film to recommend. Rothrock fans should watch it for sure, but then again Rothrock fans already will have. Fans of martial arts movies, especially those of the American direct-to-video/Chuck Norris vein should get a kick out of it, and it's better than your average B. Edit out the cruft though and you have the core of a really good quality action movie, and that's probably what makes it an overall disappointment. Through the movie Cynthia's skirts get shorter and shorter, until the sex scenes appear and they come right off. But it's the long one at the end that she looks best in, and if the producers had realised that, they might have made a better movie.

*Amazon have it, but it looks like no particular improvement over the pound store version, for an extra five quid. If you can find the 2 films on one disc version, the flip side is Gen Y Cops, an extremely silly but extremely entertaining movie that makes the package more than worthwhile.