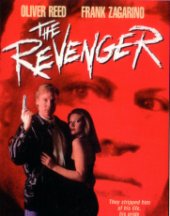 How an actress of Nancy Mulford's stature did not get a top billing is beyond me.

Unfortunately, as the years march on the chances of an acting partnership between Dirk "Face man" Benedict and Frank Zagarino diminish significantly, which I think is not just my loss, but humanity's. However, Frank has worked with some legends in his time and one of the biggest is Oliver Reed, who died after drinking a typically inhuman amount a few years back. The late eighties were not the best time for Oliver Reed, film wise, which while probably fairly irritating for him proves fortunate for fans of action b-movies - thanks to 89's The Revenger.

Before we get into the main storyline, I should warn you that this movie features more than your recommended daily allowance of saxophone. Michael Keller (Frank Zagarino) is a saxophonist, which naturally means a lot of sax on the soudtrack, but we are also treated to Mike's reacquiring of his saxophonal skills after a stint in prison. I have a theory, backed by no research whatsoever, than the saxophone playing during the "rubbish" and "doing scales" sections is Frank himself tootin' the horn, while the "professional jazz saxophonist" section is an over dub by a professional jazz saxophonist. In a perfect world Frank would have a website and I'd be able to email him the question, but then again he may never have responded, much like Anthony De Longis when I posed an Expect No Mercy/Bullwhip related inquiry. 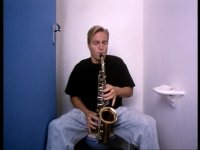 Years later and back in the open world, Michael finds out that his brother was on the run from a porn producing gangster by the name of Jack Fisher (Reed) who is convinced that Michael has the half a million dollars that Mackie stole from him, which he doesn't. To put a little pressure on our hero, Jack kidnaps Michael's girlfriend Lisa (Mulford), leaving Michael no option but to take her back by force with the help of Mackie's old Vietnam war buddy, Harry, played by Jeff Weston. Fisher isn't the type to give in easily though, and the body count starts rising. As an aside, the film opens with a stylised Zag training scene presented in black and white with odd splashes of colour, perhaps inspiring the cinematic style of the recent Sin City movie. Perhaps not.

Given the period, the cast, and the high levels of nudity early on, it would be fair to say that I expected very little of the acting in The Revenger, but I was most pleasantly disappointed. Oliver Reed chews the scenery well, but actually injects some pathos into his character, notably in his neurotic interactions with his girlfriend, and his distress over the death of a henchman. On the side with the white hats, Zagarino does almost as well with Michael, carrying off what could have been quite a nauseating role with aplomb. Of course, you expect him to be able to yell out of a burning building while holding a machine gun, but the segment where he goes to find his old band, and some of the scenes with his brother's army buddy Harry are played just right. Speaking of Harry, Jeff Weston puts in a cracking performance, again against a very cliche ridden character. Frank Zagarino always brings an entertaining energy to his movies, no matter the budget, and this time the cast complement it well, even Nancy Mulford, who makes a competent enough girlfriend in peril. 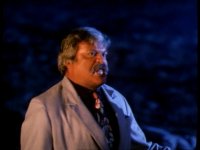 There are problems though. On the nitpick-y front, there isn't a great deal of actual revenge in this movie, at least no more than you'd expect from your average b-action movie, which makes me doubt whether anyone had actually watched the film when naming it. On the more practical front the film is not short on predictability, and suffers from a completely unnecesary wrap-everything-up ending. The poor finish is highlighted by the fact that it follows a generally excellent ending sequence, complete with explosions galore, barricaded cabins, and slightly heroic petrol station attendants. The writing in general is on the more acceptable side of medicore, but lacks the witty flair that, to be fair, this kind of movie didn't really get till after Lethal Weapon, which was probably not released until after The Revenger had been written.

Should you specifically want to see this movie, which is within the realm of believability for the Zagarino connoisseur, the options are somewhat limited. Amazon returns only the kung-fu movie of the same name, and for those across the pond there doesn't appear to be any evidence of a region 1 DVD release at all. If the local pound shops are all out then a few copies seem to be available on ebay, but I'd view that as a last ditch as you will be paying more for postage than you will for the film.