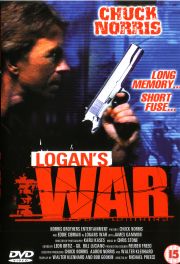 Beardless Chuck continues the tradition of the cover having nothing to do with the actual film.

Between bouts of starring in informercials for excercise products and being a source of internet comedy, Chuck Norris makes the odd movie. Mostly he takes the leading, but on occasion elects to support some young gun, usually in a script he penned himsself. Despite only Chuck's name appearing on the cover, Eddie Cibrian is such an actor, and the movie in question is gangster / revenge / martial-arts made-for-tv epic, Logan's War.

Before we get to the main review, a couple of Caveat Viewers. First, despite the similarity in names, there is absolutely no relation to sci-fi classic Logan's Run, and any hopes you may have of seeing Michael York switchkicking his way back into the dome will be cruelly dashed. Secondly, if you, for some reason, actually want to follow the plot of this movie, do not watch the trailer that accompanies the DVD. Presumably due to the fact that there never was a theatrical release, someone has created a cinema length trailer by simply grabbing clips at fairly regular intervals throughout the film and sticking them together. Our junior/work-experience trailer creator made sure to include all the important plot points and action sequences, effectively summarising the entire film down into one 3 minute video. On the other hand, if you just want to see The One True Kick (see below), then the trailer is a good way of consuming the reader's digest condensed version of the movie. Thinking about it, there's probabaly a market out there for talented editors with time on their hands to recut movies into bite sizes recaps for those who like to discuss movies in the pub, but don't want to spend two hours of their life watching Chronicles of Riddick. 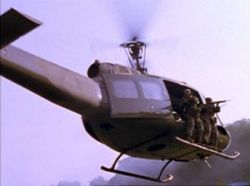 With regards to the story, this is an action movie so it shouldn't cause anyone suprise or alarm. Though, I do suspect there is some derivation from the script I wrote, for a film starring me, where Chuck Norris would be my uncle and teach me karate on a farm. Admittedly there weren't any mafioso in my version, but there weren't any scenes of Chuck and I fighting ninjas on top of stampeding cattle in his, so it evens out.

Logan Fallon (Brendon Ryan Barrett) is just ten years old when he witnesses the murder of his sister, mother and DA father by the mob - narrowly escaping the same fate through a prescient sense of danger. He's placed into the care of his ex-Ranger rancher Uncle Jake (Norris). Jake provides a loving but bearded home life for Logan, teaching him about life and roundhouse kicks. Driven to earn his uncle's respect, but at the same timing Burning With Hatred for the gangsters that killed his parents, Logan, now all grown up into Eddie Cibrian (currently on Invasion, but also featured in the excellent But I'm A Cheerleader) joins the US Rangers. He rediscovers his danger-sense by deftly escaping through an enemy minefield after his mission in Terrorististan goes wonky (nb: you may now forget he has magic danger sense, as it plays no further part in the film*). As soon as he gets out of the Army, having won his Uncle's respect, Logan goes back to Chicago to infiltrate the Mafia, and find the man that killed his family - eventually working his way up to a meeting with the main man himself, the Don.

Supporting Eddie and Chuck are are number of pretty decent actors, primarily FBI agent Joe Spano, who's currently making a decent turn as another FBI agent in NCIS, and TV semi-HITG Jeff Kober who plays the gangster that killed Logan's family in order to become a made man. Behind the camera is regular Norris director Michael Preece (who helmed the lion's share of Walker: Texas Ranger), while Chuck and Aaron Norris wrote the script.

Of course, no one is really going to watch Logan's War for the moving drama of a boy's battle with his deep seated internal demons, which leads us to the true motivation: kicking people. However, there is suprisingly little violence in the film, especially in comparison to the average b actioner. I'm guessing this is due to the made for tv nature of the movie, as while the action is not excessive, there is generally something going on that might convince the channel hopping viewer to stay and watch a few minutes. 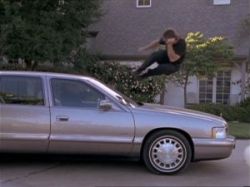 Of the scenes that stand out, the inital hit works fairly well, though it's pretty much straight out of the textbook of scared children watching their parents get murdered, and the training and war scenes are similarly functional, but not massively exciting. Still, they are mostly buildup for Logan's infiltration into the mob, which features some natty moves as he shows the Don he can be valuable as muscle. Even so, the movie only really gets into top gear near the end with the final action sequences. In fact, it all builds up to one absolutely fantastic stunt (a remake from an earlier Norris movie), which, appropriately enough, is performed by Chuck, involving leaping through the windscreen of a car to kick a man in the chest. It is a kick that cannot be adequately described with my poor grasp of the language, but suffice to say one of Chucks feet actually goes through the steering wheel. As you may expect, it's shown uncut in the pseudo trailer mentioned above.

Putting the move near the end was a good idea, because instead of ejecting the DVD with a slight feeling of disappointment, you stab the button with the knowledge warm in your heart that Chuck Norris just kicked someone through a car. While it does just about justify the pound, the fact that the film has to rely on Eddie Ciprian's wooden, flat performance really does take some stomaching, especially since he's proved that he can turn in a good take on other projects. I think with the relative lack of arse-kicking involved, the film would have been better served by a more experienced actor who they could have trained up to do the martial arts, rather than the other way around.

On the other hand, the lack of blowing up every vehicle that appears on screen made the budget stretch a bit further, and the production values are generally high. Starting with some good helicopter shots of Chicago, the film is well shot, and features a variety of credible sets - fairly unusual among the crop of pound shop movies. Chuck's performance is spot on, of course, though I think that just makes how unengaging most of the film is even more glaring.

* OK, technically he uses it when Jeff Kober has a gun to his head, but what kind of danger sense is that? I don't thing you have to get chomped by a radioactive genetically modified spider to work out that when a gangster has a gun to your head that you are in danger. Or if you do, then get my cape and spandex because it's crime fightin' time.