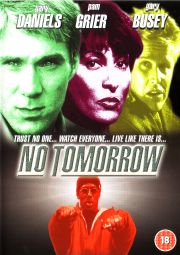 When I mentioned the name Gary Daniels to one of my friends he professed to be shocked that I would intentionally watch a movie featuring the big G, who my friend claimed had "No Charisma". I retorted that I not only watch Gary Daniels movies, but Gary Daniels movies where he doesn't even kick anyone. The case in question, No Tomorrow, is from the fertile production minds of MWIAT favourites Mehri and Pepin, who not only went straight from rap mogul Master P's directorial debut on Hot Boyz/Gang Law into his sophmore effort, but also manage to slot in a host of PM Entertainment regulars.

For his second attempt Mr Miller directs a script written by Terry Cunningham, though I suspect he injected some elements from his own fertile imagination. The cast is top notch, with the lead going to aforementioned Brit kickboxer and direct to video star Gary Daniels, Master P featuring as rap mogul and gangster "Maker", and Pam Grier playing the G-woman on the trail of international arms dealer Gary Busey. Frank "Frank" Zagarino has a cameo at the start, the female lead is filled by aussie Jodi Bianca Wise, and a host of B and TV regulars pop up throughout.

The opening of the movie is also the first scene of what we will refer to as Film B - being the Master P Shoots Things film, as opposed to the longer Film A, which is the Gary Daniels Does Acting film. Film B starts at The Ice Factory, which as far as I could see wasn't a club, but literally a factory where they make ice, where Frank Zagarino is overseeing a shipment of Illegal Weapons. Maker's none to happy in being cut out of the deal, and when the Zag summons a squad of men in balaclavas and chemistry class goggles, Maker takes pulls out a combined flamethrower and rocket launcher - an elegant weapon for a more civilised age. Despite the overwhelming odds, Maker's rocketthrower makes short work of the many, many SWATesque guys, eventually leaving just Frank cowering behind a previously exploded car. Maker offers him a simple choice: tell him where Noah is and drive out of here with the truck o' weapons, or get flamerocketed. Frank chooses the smart option, gives up his boss and hops in the truck, which Maker immediately blows up. Never trust a rap icon Frank. 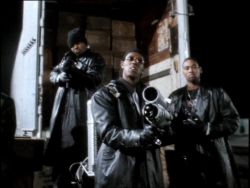 The remainder of "Film B" focuses around Master P's inherent inability to complete his everyday record label business without hordes of bemasked commandos invading his personal space. Percy dispatches said commandos with his pair of gold plated gats, occasionally employing some implausible kung fu. While many may think of this as ego stroking, I think P would defend it as a build up for Maker's reintegration to the film proper, and in many ways an exposure of his inner character through the medium of violence - much in the style of Hong Kong's tradition of heroic bloodshed. Being that at one point five men with submachine guns fail to hit a crouched Maker as he cowers three feet away, all dying seconds later as he unleashes his twin pistols of death on them, I favour the first theory.

"Film A", on the other hand, focuses around our hero Jason (Daniels), known, like everyone else in this film, only by his first name. As we are introduced to him, Jason is working in some sort of shipping admin job. His wideboy friend has an proposition that could net Jason some money, and shows him a glitzy night on the town, with visits to stripclubs, and some sort of nightclub complete with a bit of darkwave pumping out the speakers, and some goth-ish hookers. Potentially this is just Master P's view of what white shipping clerks do to have fun, but it clearly works for Jason, who dives into Wideboy's scam - cooking the books at the company to get product through to The Greek, or in this case The Busey. 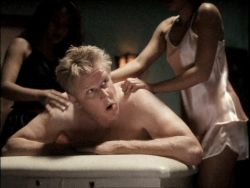 Noah (Busey) is an international arms trading middle man, briefs FBI agent Pam Grier. She's attempting to stop the a nutty right wing militia buying a plutonium trigger - a deal Noah is brokering. Unfortunately Diane's command of her minions is incomplete, and one Agent Lancaster decides to pay Noah a visit, at the same time as both Messers Jason and Wideboy, and Noah's Chinese trigger supplying buddies are in town.

Lancaster's subtle FBI psychological technique of hammering the place with machine gun fire takes out most of Noah's entourage, including Wideboy, and it's left up to Jason to effect an escape, with car/helicopter persuit aplenty, until Jason dispatches the chopper, and Lancaster, with a molotov petrol can. Noah decides the deal is still on, promoting Jason to higher duties, and preparing for an exchange out in the Mojave, at a (presumably) disused airport. Little does he know he, unlike the audience, is in for a few suprises.

Production wise, things stack up well for No Tomorrow. The soundtrack is full of No Limit (? Master P) tracks, and there are some decent cuts in there, especially during Film B's record label shoot out. There are explosions and action set-pieces, and it's clear the filmmakers spared no expense (well, relatively) on the blowing stuff up part of the cinematic process. The stunt work is up there with PM's best, and at times the film has the feel of a much more expensive movie.

On the flip side some of the sets are work experience D&T student cheap, Pam Grier's HQ in particular, and the variety of locations (except the sole beach, which appears to be masquerading as somewhere Tropical during the ending) don't really lend themselves to a consistency. It's mostly forgiveable stuff. 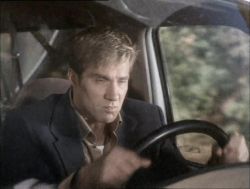 As for the talking-and-doing-stuff part of the movie, if you ignore the ego stroking scenes (or, peversely, just watch them on their own) and the irritating and predictable ending, it's not a terrible movie. Unfortunately, the bits that work don't quite gel with each other, and while Gary Daniels' performance is a major step up for him, especially considering that he does no martial arts at all, putting veterans like Pam Grier and Gary Busey in the mix doesn't really help - though neither does the wardrobe department's "artistic vision" in the boxer shorts Mr Daniels sports before shower sex scene. The ending is almost a case in point, as I certainly would have much preferred to follow Gary B's arms dealing sociopath out the end of the film than Gary D's mercenary sociopath. I mean, Noah had just been sold out and he responds with "You're sneaky Jason. I like that!".

Of the supporting cast, Jodi Bianca Wise does a good turn as Gary's love interest, and is pretty and talented enough to land more than the one shot tv roles she current appears to be getting. Her aussie twang broke through a couple of times, but mostly her accent was passable, and her performance solid. Larry Manetti's slightly sycophantic assistant complements Gary Busey's natural craziness pretty well, Eric Cadora does an excellent job of being FBI arsehole Lancaster, and George Cheung does his normal good Oriental stuff as the Chinese supplier.

No Tomorrow should have worked, at least as well as a pound shop movie can. There's some decent action, a suprisingly good performance from Gary Daniels, and some excellent scenery chewing by Gary Busey. Unfortunately, the gratuitous Master P sections are totally disconnected from the film, and while Daniels does well, you just don't engage with Jason at all. Partially this is due to the performance, but from the beginning there's nothing that gives the audience empathy for the character. In clips, I bet No Tomorrow looks great, but as a whole it just doesn't quite hang together. The moral of the story is: gratutious sex scenes - ok, gratuitous rap shootouts - no need.

I don't want to make the same mistake I did with Gang Law, so here's the full sound track listing, as cribbed from the credits: