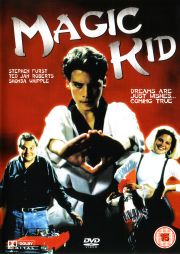 The urge to just throw a huge picture of Don "The Dragon" Wilson on there must have been massive.

In a perfect world there would be a bleak first draft of this movie. It has all the elements for a harrowing tale, a drunken uncle, a boy trapped in the seedy, dangerous world of Hollywood, forced to fight by the aforementioned drunken uncle, vicious gangsters, and Don "The Dragon" Wilson. This is the film we'd have got if Lars Von Trier directed*. Instead, we get the main Merhi himself (that's Joseph, not Jalal typo fans) with his co-conspiritor Richard Pepin is not far behind, making a family movie about one kid's dream to kick people in the face. And a dream is just a wish... coming true. Whatever that means.

The kicking people in the face part should not be suprising, as Magic Kid was written by Stephen Smoke, writer/director of Final Impact, a Lorenzo Lamas movie about kicking people in the face (I know that doesn't narrow it down much). The kid part is a little more unexpected, as PM Entertainment are more known for their action films than wholesome family fun, though wholesome family fun this indeed is, as much as Captain Ron at least.

Our Hero, and (presumably) the Magic Kid in question, is Ted Jan Roberts as Kevin, Vague Martial Art expert and youngster (though older than he seems to be playing in the film). After becoming champion at the Vague Martial Arts Championship of Spokane by defeating a kid in Rex Kwan Do trousers Kevin is packed off with his sister Megan, played ably by Shonda Whipple, to visit their uncle Bob, an agent out in LA. Fans of mid-ninties sci-fi will recognise Bob as Stephen Furst, Vir on Babylon 5, and in my mind one of TV's go-to guys when you need someone rotund and nervous. Interestingly, Furst went on to direct Magic Kid 2, which is unavailable in the pound shop, so far. 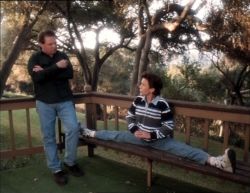 Bob has promised Kevin that he'll introduce him to Don "The Dragon" Wilson, to whom Bob gave his start many years ago. Kevin is a huge The Dragon fan (proving that the film is set in an alternative universe where people other than Lloyd Dobbler are obsessed with Don Wilson), and sleeps with a slightly disturbing picture of Don doing a bit of Bruce Lee pose on his night stand. Megan has been promised a meeting with "soap star" Tony Hart**, though I think I'd have pushed for the whole deal and asked to meet Morph as well. Of course, when the pair arrive in LA they discover that Bob is a drunk and an inveterate gambler, who mostly seems to be an agent for clowns, and is heavily in debt to some (comically inept, of course) mobsters. Then, as little as you may expect it, martial arts ensues.

The martial arts is really quite good, and usually setup with an entertaining lack of pretence. Practically any situation seems to have a chance of resulting in some Beefy Guys kicked in the face by Kevin. This could be Megan being hit on by some obnoxious surfers (where is Swayze when you need him) while Kevin is inexplicably fishing, Bob enjoying a game of pool against some undesirables who don't want to pay up, or just a good old fashioned trio of gangsters in fancy dress. In terms of raw martial-arts-per-minute, this film is definitely good value. The physicall kicking-in-the-face is well done as well, Ted Jan Roberts clearly being a talented martial artist, with the final fight against hordes of mooks, which also features The Dragon, featuring some impressive double kicks and big sweepy roundhouses, and throughout the fighting is complemented by decent editing which doesn't obscure the moves too much. 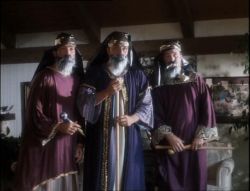 On top of the regular family fun of TJ kicking people, there are some nice bits of non-martial arts acting, with some decent scenes between Bob and his girlfriend/assistant***, and of course with the Goofy Goons. There's also a beautiful advert for Universal Studios, as Bob tries to redeem himself by taken the kids on all the rides. Presumably this is how they got permission for shooting some of the At A Film Shoot type stuff at Universal, or some other such deal, but I'd advise taking the opportunity to make a cup of tea, stretch your legs, or drain The little Dragon, as the movie continues shortly.

Being basically a kids movie, it's hard to critique the plank like qualities of the acting, though TJ takes his performance to hardwood levels, with some excruciating descriptions of the True Ninja Way, plus a slightly creepy monologue at the start of the film. Shonda Whipple makes a reasonable job of a nothing role, and Stephen Furs tsweats and stammers his way through the film with consumate ease. Other than Bob's, the best lines seem to go to the comic relief mobsters (Mobster: "Where do goons live? Laguna!", Boss: "When your iq reaches double digits I'll give you a payrise."). Joseph Campanella makes a great, drily sarcastic godfather, and Bill Huffsey does a good job as the lead clueless wise guy. Much of the rest of the cast is there to get kicked in the face by Kevin, but throw in some quality stuntmen acting, and on one occasion a Ninja Turtle level californian accent. 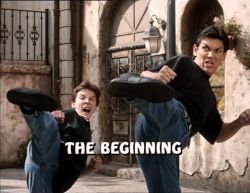 Overall, Magic Kid isn't a bad family-oriented martial arts film, a genre not overly known for it's acting powerhouses anyway, and would make a reasonably entertaining matin? movie. I have no idea why the BBFC decided it deserved a 15 rating over here, as it's a PG in the states and that seems like a fair recommendation. I notice that Magic Kid 2 was submitted at the same time (2004) and received 3 seconds of cuts, so I'm guessing there's a fight move that falls under their repeatable behavior watchlist - probably headbuts or ear claps. I'm hoping it wasn't as part of their restriction on "portrayal of violence as a normal solution to problems", as the movie does clearly show that while most problems can be solved with violence, sometimes you just have to knuckle down and hustle some bikers at pool.

By the way, in case you watch to the end (which I recommend, if you're already watching it) I think you'll see it also confirms my theory that putting a "where are they now" dragnet style ending on a movie is never, ever, a bad idea.

* I think we all know that's a lie.
** OK, it was Tommy Hart. But Morph goshdarnit!
*** I tried to check the name of the actress on IMDB, and I think it's Sandra Kerns. It's never good when your prime piece of IMDB trivia is that you're not related to someone though. Unless you're Adam Baldwin.