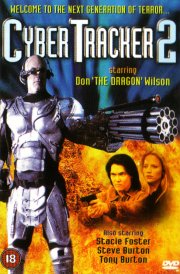 De Longis gets no cover love.

Having seen it years ago, I've been intending to review Cybertracker 1 for some time now, but never quite found a way to write it without using the word "Terminator". However, while browsing the revitalised pound store DVD range I discovered a Prism double sider with Cybertracker and it's previously unavailable seque, and decided to skip past the first film entirely.

We are first (re)introduced to Eric (Don "The Dragon" Wilson) at a drug buy - of course he's just working undercover, and soon finds himself, and thirty or forty cops, up against laser wielding bad guys - and these lasers explode! Much like Terminator 2, we're also introduced to a friendly version of the previous film's villain, in the form of a combo Chaingun/Flamethrower wielding Tracker called number 9, who sports a fine cosplay tinfoil Robocop look. 9 rescues Eric and the Cops in the buy, using the power of exploding things, and shows that maybe Trackers are OK, and were just misunderstood.

However, the baddies are busy making next-generation of Trackers, now super advanced killer androids that appear human, and using them as assassination machines. Unfortunately for Cyborg Cop fans John Rhys-Davies was no where to be seen (and you're not likely to not notice him, lets face it), though at least this movie does, in fact, feature a cyborg cop.

The evil assassin corp have been hired to bump the Vice Governor up a pay grade, and do so with an evil robot version of Connie from the first film, a successful reporter and wife of our hero, Eric. The police, of course, assume it's her, and the plucky pair (plus their cameraman) are forced underground as they try to dodge both the forces of Law & Order, and Evil Corp. attempting to clean house. 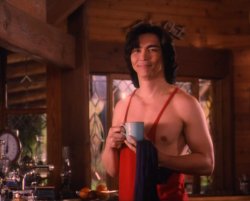 The replicant based baddies are lead by evil weapons dealer Paris Morgan, played by the wonderful Anthony De Longis, who, it must be said, handles the Evil Genius moments and the brief fight sequence he has with total maniacal cool.

Of course, the casting director had little to do with the biggest stars in the movie, the heroic Explosion and his brother "Boom!". No matter what the actors are doing, there's always time to cut away to a model house getting blown up, or one of the many, many exploding police cars that PM Entertainment presumably had a factory cranking out somewhere. To be fair, the explosions were pretty good, and the models not totally unconvincing, though the lasers left something for the asking. 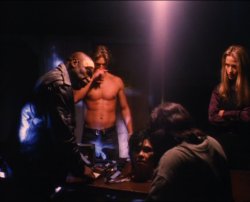 That said, while "Boom" is rendered pretty well by the Sound FX department, there is a somewhat annoying choice around AGNES 3000 (sister of Outkast rapper Andre 3000 presumably), Eric's computer system. Throughout it's limited selection of scenes the computer emits a truly irritating high pitched whine, which is a shame as the effect is fairly decent - a bit like the digital pixie woman off the Robocop TV series.

The movie doesn't let up on car chases either. Again, in an entirely unTerminator moment there's a chase through some kind of concrete river passage, with an evil Tracker chasing Eric and Mrs Eric in a truck. Eric luckily stole a humvee with a machine gun on the back, which he puts to good effect. One chase scene even involves what is apparently the longest tunnel in the world, where the citizens appear to get actively involved, as the chasing parties overtake the same car a number of times, from a variety of angles. 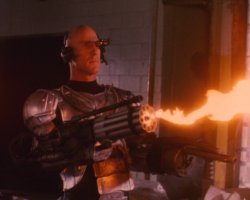 Interestingly, the film throws in a reference to VR fighting masterpiece Expect No Mercy, when during a extended Eric nipple scene, a random girl arrives to train with his VR headset. Rather than the fine "slightly glowing person in a silly suit" technique of ENM, the VR characters here are poorly modeled Ninjas with detachable limbs, whose asses the girl then eKick. She the proceeds to bear no further relevance to the plot.

This film was released just after the original, implying a somewhat tight schedule, and unfortunately, the back to back nature of the filming seems to have taken it's toll on The Dragon. Mr Wilson is lacking flair, both in his plank like performance, which instead of it's usual supple willow is more of a sturdy oak, and even his kicks and chops don't come across as dynamic as normal.

Indeed, despite the multitude of action sequences, and event some Swayze-level shirtlessness from Jared, the film is actually a bit listless, and rather predictable. When it succeeds in breaking away from this, the film seems to run to the other extreme. There are a few disposable moments, such as VR girl, that contribute little, and I'm pretty sure at one point the Evil Corp. openly assassinate the Governor in the rather public lobby of their secret base without much regards to the consequence - which is fair enough as there weren't any! Traditionally I tend to associate PM movies with a fair bit of pace (and plenty of explosions), but while it does cover a lot of ground, the viewer is left feeling every step.

All in all I found Cyber-Tracker 2 somewhat of a disappointment, a little lacklustre even when compared to the first one, and not up to fine Wilson efforts like Out For Blood. Yes, there is some good quality violence - the EricTracker's assasult on the police station was undeniable fun, but there are better films out there from both The Dragon and PM. Do keeping checking out the pound stores though, as there have been some reasonable releases recently - Bride of Chuckie, £1, bargain!