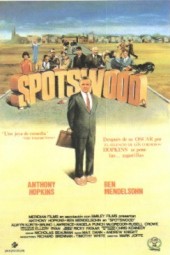 You can tell this is an old poster as the big names on the front are actually the leads.

Most of the movies that find their way onto these pages are of the action variety, partially because of the fact that there exists a market for direct to video action movies, and partially because action movies can often skate by on a particularly thin veneer of acting ability. To kick off 2005, we have 1992's Spotswood, or The Efficiency Expert in the US, an Australian comedy that follows in the Aussie tradition of telling solid stories and producing entertaining, clever films with great attention to detail.

Thankfully, given the nature of the movie, there are some decent actors in the mix. First and foremost is Sir Tony Hopkins as efficiency consultant Errol Wallace. The next most-likely-to-be-credited is Russell Crowe, but this is one of Russell's earlier movies and his part is a fairly small one. Other Aussies fill up the majority of the roles, of course, including Toni Collette, who debuted in Spotswood, Ben Mendelsohn as the engagingly awkward Carey, Bruno Lawrence, Alwyn Kurts and a whole host of notable australian stand bys. The film was directed by Mark Joffe, who most recently helmed Billy Connolly's The Man Who Sued God.

Spotswood is a good, if not spectacular movie. It's not a great film, I suspect it will make very few people's favourite movie lists, but there is nothing massively wrong with it, which is a distinct achievement. It is a comedy, primarily, but with enough drama to satisfy someone who's not particularly interested in a chuckle. It takes it's time to let the characterisations mature, but does so with a reasonable feeling of pace, and it's a local movie, but one with international appeal. You don't have to be from Australia to appreciate this movie, you just have to be from somewhere that has experienced modernisation, and that's pretty much everywhere.

The conflict in Spotswood is the modern versus the traditional, with the representation of each being a mantle that is shifted between several characters throughout the run of the movie. The film is set in the early sixties, and Anthony Hopkins and John Walton are business consultants in the final stages of streamlining, via the sacking of several hundred workers, the running of an Australian factory as part of a condition of sale to an American company, with part of the proceeds of the sale as an incentive. They are hired to consult on a small moccasin making business by the owner, Mr Ball, which Errol Wallace attends to, leaving his partner to finish up. Despite Ball's assertions, Wallace (Hopkins) soon discovers that the business is surviving only by selling off chunks of property around the factory. His efforts to modernise the production process meshes poorly with the relaxed, eccentric methods and expectations that the workers have developed, apart from with the bratty and ambitious executive Kim Barry (Crowe). In contrast to the factory being sold to the Americans the workers do not respond militantly to the changes, doing their best to make Wallace welcome. While all this is going on, young second generation factory worker Carey (Ben Mendelsohn) attempts to use his new position as Wallace's temporary assistant to woo the boss's daughter, Cheryl, who is far more interested in Kim, while being completely oblivious to his friend Wendy's feelings for him. As the staff start to feel this pinch of Wallace's changes they see the Carey as an implicit part of this, and of the break up of the extended family that the workers had formed.

One of the strengths of the film is the singular feel it creates. The browns and yellows of the set design and lighting, the 60's wardrobe, hair and makeup, and the writing all create a fantastic image of the world of Mr Ball's shoe factory, and its conflict with the cold environment of Wallace's home and his relationships with his wife, and consultant partner Jerry Finn. The two threads of the story line, following Carey and Wallace respectively, weave in and out smoothly, both struggling with the same central message of change, but change for the better. The main problem with the plot is the predictability. There is little chance of anything in this movie suprising you, which dampens the pace, nullifies any possibility of suspense, and hurts the tension between the key elements.

Overall, other than a superb slotcar racing scene, the memorable moments in Spotswood are all character driven. Hopkins' performance is mannered, subtle, and everything you'd expect from an actor of his stature, but what is perhaps more suprising is the depth of quality in the cast, as there is hardly a badly delivered line or misplaced gesture to be seen. Spotswood is not going to be everyone's cup of tea, it's probably a little too gentle in it's humour for some, and a little too contrived for others, but I think it's at least worth a watch. I'm fairly sure that you can get this one on a two-films-on-one-disk with Wet Hot American Summer, which is an absolute steal. Of course, if you can't find it it is on Amazon for slightly more.