All The Queen's Men 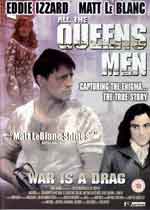 Thanks to the miracles of modern design, Matt LeBlanc is on the cover twice.

Eddie Izzard, how do you choose film scripts? While I may never know the answer to that question, I am willing to guess it's not by reading them. From The Avengers to Circle, Ed can't get enough of being... but Eddie Izzard was pretty good. In All The Queen's Men he doesn't even achieve that, but it should have been so right! Men in dresses, WWII era cabaret, Nazis, it's got it all and Eddie should have fit right in.

However, it all goes wrong, and it does so from the very begining with a voice over that could induce cringes right through the armour on a shiny new Sherman. Immediately afterwards we're treated to Matt LeBlanc, as the last-name-only-agent O'Rourke, engaging in a daring (for some definition of the word daring) escape from a German base, complete with an Enigma machine. This includes a tank chase, one of those rare cinematic entites that would take an exceptional amount of skill to make unenjoyable (though it's no GoldenEye). This cannot last, of course, and we are rapidly brought into the movie proper after enjoying the sight of an incompetent British office destroying the Enigma.

One of the interesting artistic choices that the opening indicates, and is repeated throughout the movie, is the lack of subtitles on the sections conducted in german. O'Rourke doesn't actually speak german (because, you know, he's a hero) to be fair, but usually in these kind of situations the german speaking sections are quite brief. This is not so in All The Queen's Men.

Anyway, we quickly reach the movie proper, where, obviously, O'Rourke is asked to go back to germany and get another Enigma machine. To aid him a crack team is put together, consisting of Temporary Major Archie, an administrator sent to keep O'Rourke in line, and played by the vastly over qualified James Cosmo, Johnno, a young (and shockingly, naive!) codebreaker who speaks 27 languages (including german) played by David Birkin, who was the kid that played the young version of Captain Picard in that one episode that time, and finally Eddie Izzard, playing the cross-dressing, bi-sexual former lieutenant Tony, who also speaks german. The target is the the source; the very factory that builds enigma machines.

So far, so mediocre, but now is the time for the movie's big punch. Y'see the war machine has sucked the fatherland dry of its chaps, so all the staff at the factory are women. In order to blend in O'Rourke and his team are going to have to go disguised as women. Comedy uranium. Once the undercover pongos parachute in to Germany, they quickly realise the factory was a fake, but decide to meet up with their local contact and try and find a way out. Their local contact turns out to be one of the best bits of the film, the very lovely love-interest Nicolette Krebitz as Romy, a librarian and allied agent who keeps copies of all the banned books in her loft.

Of course, the forward thinking appeal of ATQM would not be complete without a love interest for Eddie Izzard's Tony as well. It seem that Tony's ex-wife, Paloma, is in the country performing a little opera to uninterested german troops, which means that her driver, Tony's lover and the cause of his seperation from Paloma, is there too. Franz, played by german action Oliver Korittke, is a fairly inconsequential character, though well performed, who mostly sustains interest though a rather spiffing punch that at various times gets applied to most of the cast.

At least one of the four writers must have had a real dedication to the soldierly arts of the screenplay though, as All The Queen's Men comes with a full clip of clich?s, from the secret agent who always works alone to the pompus commander, all drawn from the great hollywood clip-art character file. The jokes don't fair much better, with some quality drag classics finding their way in, such as during O'Rourke's encounter with the marvelous, though only in the film for two scenes, Udo Kier, as General Landssdorf. 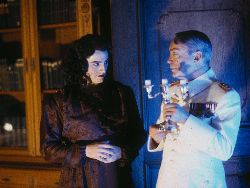 Having received an invitation to one of the General's famously wild parties, Matt LeBlanc, disguised with the finest plaster board make up and wig, and Romy ditch their (well, Romy's) dates and make their way over to the General. Landssdorf turns round and is presented with a very attractive woman and Matt LeBlanc in a dress. I wonder who in the class can guess which one he has the hots for? Of course, Udo spirits O'Rourke upstairs to his boudoir, and decides to show off some naughty pictures from his safe, the one containing the very secrets that Our Heroes require! Matt punches him in the face, and rifles through the papers. When the general wakes up, he looks as if he's about to call the guards, but instead just asks Matt to hit him again! Ah S&M, what classic japes haven't you given us.

The movie is not devoid of plus points. The production is very nice, there are some decent locations and a very nice title sequence, but then again this is a movie with a proper star, not your average B fare. There are some amusing moments, especially with Eddie Izzard, such as his remark after Franz describes him as bi-sexual in a thick german accent: "Yes, I'm bee-sexual, I have sex with bees". The love story between O'Rourke and Romy is actually quite effective, though the one between Franz and Tony feels somewhat flat. At one point, James Cosmo is captured and tortured in front of Romy, in a suprisingly effective scene. Of course, it doesn't last long, but it's that hint of the daker side of the film that adds real colour, from the bombed out city much of the film takes place in to the motherless child that latches on to Archie.

Disappointingly though the performances of the two main names, Izzard and LeBlanc, is not really up to par, in a movie that sorely needed a strong lead. Eddie seemed less relaxed in the role than even in Avengers, and that was much more of an embarassment. Matt puts in a Joey standard performance as well, really not seeming to look far beyond the character that he was, at that time, playing every week. In fact, the movie would have probably worked better with more Tony than O'Rourke, with Tony fulfilling the role Johnny Depp dominated Pirates of the Caribbean with. That's a comparison I wouldn't have predicted making just after watching this film.

The very ending scene sums things up well though. It's a weird, static shot of LeBlanc and Krebitz leaning against a door way discussing getting their nasty on with reference to whatever they are staring at. It's not very funny, and is a decidedly dull shot, but Nicolette looks fantastic in a WWII uniform with a skinny tie, and vague innuendo is Matt's fort?. All The Queen's Men is no Kelly's Heroes; it really doesn't work at all. Eddie Izzard completists will probably want to give it a viewing, everyone else should probably give it a miss. The DVD on Amazon has a making of feature and it is possible that the one I got from poundland did too, but I certainly didn't feel like checking.