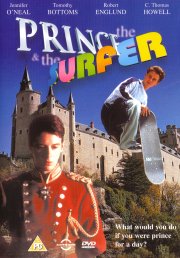 Kids, don't try and jump over a castle on your skateboard.

Ah literature. While I haven't technically read anything by Mark Twain in really quite a long time, I have seen his apperances in those episodes of Star Trek when they go back in time and Whoopi Goldberg is there, which I think makes me more than qualified enough to judge Arye Gross' Californian re-imagining of Twain's The Prince and the Pauper, in the way more radical The Prince And The Surfer.

Gross is best known as an actor, for some definition of "best known" anyway, but on this film he's (mostly) behind the camera - this is his first, and so far only, directorial credit. Being that he's somewhat of a Hey, It's That Guy himself, it is no suprise that the film is packed out with similar familiar faces, but often unfamiliar names. Timothy Bottoms presumably had his name taken off the final credit roll, but plays the Surfer's dad, Johnny, C. Thomas Howell appears as a wacky security guard (warning: it's krazy komedy!), the always fantastic Vince Schiavelli plays the prince's manservant Baumgarten, Robert 'Freddy' Englund plays evil Minister Kratski, Allyce Beasley (who played a gnome in Everquest 2) makes an apperance as part of the royal staff, and Ayre Gross himself turns up as the other wacky security guard (caution: kooky).

The leading roles are filled by Sean Kellman, whom I have never heard of, and possibly neither has anyone other than Mr and Mrs Kellman, as the two titular roles, the up and coming Linda Cardellini as Mel, the Prince's love interest, and the not-up-and-coming, perhaps-peaked-with-this-film Katie Johnston as the Surfer's love interest, Lady Galina. 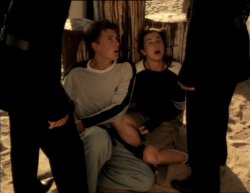 While I'm sure everyone is familiar with the plot, everyone is probably not familiar with the tubular inSURFpretation writer Gregory Poppen (who cameos as a steering wheel lock wielding driver) has fashioned. The prince is Prince Edward of Gelfland - heir apparent to a monarchy with economic problems. The Queen, a distinctly and inexplicably american Jennifer O'Neill, takes her son and his betrothed on a trip to the USA, hopefuly to broker a trade deal to save their country. At the same time, over in the States, Edward's doppleganger, "Cash" Canty, is hanging with his buddies, riding his board, and robbing magically disappearing coffee and news papers (continuity may not be this movie's strong point). Cash dreams of becoming rich, and getting out of the rut he and his friends find themselves in. Edward dreams of seeing America, and experiencing life with the common people. Unfortunately Cash hasn't got the cash, and Minister Kratski wont allow Edward out of his hotel.

Eventually, Edward manages to get the chance for one slow limo drive by of the beach, with the Princess Galina, his bride to be. As they argue, Galina decides to throw caution to the wind and stick her head out through the limo's sunroof. Of course, this happens just as they pass a skate park where Cash is hanging out. Intrigued, Cash skates up to the limo and skitches a ride into the royal resort, and mananged to evade the security. While looking for the princess, Cash ends up in Edward's room and on noticing the resemblence, a plan for both of them to get what they want is born. Little do they know that the evil Minister Kratski has a plan of his own, to make himself rich with the help of a group of scheming theme park developers who want to turn Gelfland... into Golfland. 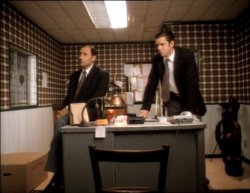 I think it's fairly clear that this is a movie for the kiddies, and should therefore not be held to the same standards that we, as adults, would demand from our cinematic entertainment. That said, it is pretty unreasonable for a movie that has Surfer right there in the title to not actually feature one single instance of surfing. At one point you see a couple of surfboards, and late in the film Cash's dad runs towards the sea with just his trunks and a surfboard, but I think that's a pretty poor effort. Given that there were some I'm Gonna Git You Sucka like stunt doubles used for some of the skateboarding scenes, it would have seemed reasonable to do the same with the surfing. To be fair though such scenes may be left forgotted on the cutting room floor, as I noticed on the credits there was one "Gail Trout" who was credited as "Female Johnny Double". Now Johnny was indeed the name of Cash's dad, Timothy Bottom's character, but I can't think of an instance, apart from the aforementioned, and not shown, surfing, where he would require a double. Especially a female one. Unfortunately Gail Trout does not have any other credits to her name over on IMDB, and there's something fishy about the google results for her name (boom boom), so her role shall remain a mystery.

There are some stand out elements of this movie though, primarily Erik Lundmark's casio keyboard score. While clearly made with a very limited amount of time, and money, I feel it is one of the few movie soundtracks that really help move the film along. This is mostly achieved by the DUHN DUHHHNNNN everytime we cut to a shot of Robert Englund's evil Minister Kratski, and the tinkly happy piano-a-like trills as Queen Abby finds love in the arms of Johnny. The laugh a minute gag fest that is the banter between the incompetent security guards at the resort actually finds its mark every now and again as well, mostly thanks to some good timing rather than funny lines. As could be expected really, most of the actors put in a decent job, including Katie Johnston. It does seem a shame that she's not done anything bar a couple of TV episodes since The Prince and the Surfer, but for all I know she's in some big broadway show. Or drunk in a gutter. Either way.

There is a new crop of DVDs in at the pound shop, with some bigger names than usual. Admittedly Sean Kellman isn't one of them, but there are far, far worse kids movies that are aired to defenceless children every day. The evil cues, Vincent Schiavelli, and Sean Kellman's attempt at both a posh and a surfer-dude accent are entertaining enough that I'd have no problems saying this is worth a pound. Interestingly, the Paul family that produced the movie have some other quality adaptations to their name, films with wonderful titles like "The Princess & the Barrio Boy", "The Modern Adventures of Tom Sawyer", which appears to feature Erik Estrada AND inline skating, and "The Karate Dog", which probably isn't an adaptation, but will probably will be adapted out of Jon Voight's CV.