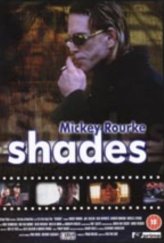 Inspired by Unknown Movies' comments at the start of the recent Local Boys review, I feel I should attempt to bring some balance to these pages by talking about a pound shop movie that you might actually want to watch instead of, say, a Simpsons episode that you've only seen twice. While Shades might not be perfect, it is significantly better than most of the crop, and anyway, how many Belgian movies have you watched recently?

The plot revolves around the making of a movie in Belgium, by a Belgian producer, but in English, with an American director and star, played by Mickey Rourke and Andrew Howard respectively. The movie they are making is also called Shades, and focuses around the actions, and memoirs, of serial killer Freddy Lebecq, who habitually wore sunglasses and is still alive in prison. Of course the shoot is plagued with problems: the star, Dylan Cole (Howard), goes increasingly off the rails as the film progresses, identifying more and more with Lebecq and attracts a lot of bad press because of it, the money pulls out, the families of the victims are protesting, and the director starts receiving death threats. On top of this the lead actress is an ambitious young woman who also happens to be the producer's girlfriend, and a documentary is being made on the film by a noted TV critic.

Mickey Rourke plays a superb almost-parody of himself as director Paul Sullivan, and Andrew Howard's tempremental star is just on the right side of believable, but the local talent of Jan Decleir as Lebecq, and to a lesser degree Gene Bervoets as the producer who will do just about anything to get the film finished, Max Vogel, steal the show. Vogel's single minded determination is suprisingly endearing, despite his near constant attempts to manipulate everyone around him and Lebecq's ambivalance over having his story told, his potential upcoming parole and his understated but evident sickness is equally compelling.

Story wise it's immediately clear that we're in the kind of territory plumbed by The Player or Swimming With Sharks, among others. The setting makes a world of difference though, with the attentions of the media and the nature of the process being quite different to the Hollywood variant that is most often presented. That said, the film is presented in a Hollywood style, which does disguise quite how influenced this film is by its home country. Lebecq is modelled on real life serial killer Freddy Horion, and I wouldn't be suprised if the film contains some recognisable characters for those in the Belgian film industry. The picture painted is a dark one, but the fundamental message of an industry full of Machiavellian characters will not be a revelation for most; it's almost the standard view of the industry for the more cynical cinemagoer.

Still, films about film are strange territory. Yes, there is certainly room for the kind of clever, satirical writing which pops up in Shades from time to time, but there's also a danger of using the opportunity to riff on, or slate, people in the industry while forgetting about the audience, a trap that Shades seems sometimes to be teetering on the edge of. It's good for writers to write what they know, but as John August said: "If screenwriters only wrote about subjects they knew intimately, most screenplays would be about Tetris, television or getting picked last for team sports".

It's clear that the producers of Shades wanted a mainstream sheen to the film, as much to reflect on the project the film centered around as for commercial reasons, and Danny Hiele certainly did a good job as DP. Add to that some excellent music by one of my favourite bands, Hooverphonic, and the package works very well . In the end, as commercial reasons go the film didn't justify them, with a quite significant amount of hype in Belgium evidently causing somewhat of a backlash on its release. This is not to imply that the film is without issues. It tapers out towards the end, with a few fairly contrived and forced scenes that may leave viewers cold. The direction is slightly clumsy, and at times the film can feel a little heavy handed with regards to it's fairly well trod subject matter. The pacing can also get bogged down, which doesn't quite gel with the US feel, but that is a fairly minor complaint.

Overall, this is an intelligent, darkly humourous slice of film, and is worth a watch. Given a decent DVD release, and perhaps a new edit, I get the feeling that Shades could have had some kind a second chance. As it is the budget market is the only place you'll find it for the time being, but it is definitely the kind of discovery that makes it worth digging.

* Again, for the pound shop deprived, someone on Amazon seems to be selling it for 79p on the marketplace.