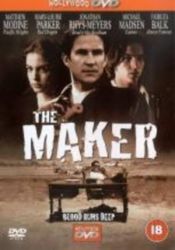 The question is whether Hollywood DVD gave Jonathan Rhys-Meyers top billing just because his name is longer than the rest.

The Maker falls into one of a fairly limited group of pound shop movies that I would seriously consider paying Proper Money for if someone put together a DVD release with a good transfer and some special features. This is not to imply that the film is a classic, but it is the kind of movie you would want to show to people you actually liked.

I might be a little biased from the get-go, as very early on in the movie, while we are being introduced to the main characters, the soundtrack features a number of songs by Elliott Smith, one of my favourite suicidal songwriters. The initial characters we meet are the friends of Josh Minnell (the always cool Jonathan Rhys-Meyers) , including Fairuza Balk putting in a great performance as Josh's teenage, lesbian best friend Bella. Josh and his mates cruise around comitting minor crimes and laying about, slightly in conflict with Josh's infatuation-from-afar with police officer Emily Peck, played ably by Mary-Louise Parker, who, despite several notable roles, I know mostly from West Wing.

Josh lives with his adopted family, the Minnells, as his parents died when he was very young. A few years after their death his older brother lit out, and hasn't been seen since. However, it is Josh's 18th birthday, and out of blue appears his brother, Walter (Matthew Modine), complete with convertible, nice suit, sunglasses, and their parents surname. He also seems to know what actually happened to their parents, referring to the nightmares that Josh claims he is no longer having, fractured dreams of a dark, dank warehouse. Walter quickly turns out to be a crook, with his literal partner in crime Felice (the wiry Jesse Borrego), and it doesn't take long for Walter to convince Josh to join him in some less than legal escapades

Walter and Felice subscribe to the concept of the "maker", the person who makes the rules for a given situation, and who dictates how everyone in it responds. When, during a heist under the guise of a removal company, the trio are stopped by a cop, Josh's instincts take over and he chats easily to the cop, while Felice is close to flying off the handle at the lawman's presence, due to his fear of returning to jail. Walter and Felice reward Josh with an extra slice of the cash from the job, explaining that just then Josh was the maker, and to always find a way to take that role and control the events. Speaking of control, the man fencing Walter's stolen goods is a haggard crook named Skarney, played by Michael Madsen, whose office is a garden table and chair set overlooking the airport, and decorated with some hired muscle. Josh finds himself getting involved in bigger and bigger heists, and coming into more and more personal conflict over what he is doing, and what happened to his parents.

Despite the criminal elements that run through the film it is very much a story of relationships, and decisions about them. Josh's with his friends reflects, and is reflected, in his uneasy friend/partnership with his brother and Felice. Walter's attempts to rouse Josh out of the teenage slump he seemed to be in, mostly by throwing him in at the deep end, and showing Josh his version of the truth about the world isn't that far from the attitudes of their foster parents, to Josh at least.

Similarly, the ongoing semi-romance between Josh and the several years older police officer Emily is one of the best, but strangest, parts of the movie. From the start, where he's lazily stalking her, to their first encounters (after he's followed her into the blood bank, and given blood, she helps him when is unable to pierce the foil on a box of juice, commenting "that's the serve part of protect and serve"), and through to his dancing with her with the confidence his brother had given him, there is a slight edge to their relationship, an element of surreality that never seems to matter during their scenes together, but makes the whole thing seem slightly dreamlike elsewhere in the movie.

The surprising thing about the film is the quality of the performances. It's a given that Matthew Modine is going to be compelling to watch, and Rhys-Meyers has certainly proved his talent recently, but there's hardly a bad performance to be found, and Michael Madsen steals the show with his understated performance, which taking the harshness out of some of the script's rougher edges. Director Tim Hunter does have a striking style, with some of the informality of the many TV shows he's worked on brought over into the style of the film, and thematically there has commonalities with his more noted River's Edge. Echoing the earlier film, Hunter regularly brings things down, to remind us that Josh is just barely 18, and how his life has snapped over the course of the movie.

In fact, the bad points are almost all centered around the character sketches in the script. While the actors naturally restrain them to some degree, the characters aren't quite on, a little too much a list of relevant character points as opposed to a view of a rounded, dramatic persona, and a little too generic. I imagine this stems from the same well as the slighty preachy attitude that the writing sometimes slips into. The writer, Rand Ravich, went on to make The Astronaut's Wife, which suffers, worse, from a lot of similar problems.

The real let down, however, is the ending. The film had built quite a lot into all the characters, and something had to give in order to tie things up. Unfortunately, the pressure was resolved by just killing most of the cast off, and while the very final scene works fairly well, the action leading up to it is bland, full of squealing tires and tired writing. It's preceeded by a quite cleverly executed heist as well, which just emphasises the problems.

Still, it's shortsighted to condemn a movie based on the last five minutes, and The Maker, despite the sloppier sections and some slightly uneven pacing, is a well made, well performed film. Overall, it is very much worth watching; even though it perhaps isn't as slick a movie as, say, Shades, there is some real heart here, and it is the kind of film that people will be pointing back to later in Jonathon Rhys-Meyers' career.

You could only get it from the marketplace on Amazon, but it seems they have restocked. You know they all came from the pound shop anyway though.