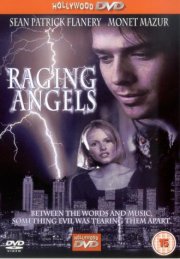 I really hope that this movie was paid for by a church somewhere, Ed Wood style. At least in that case you could say that some sort of misguided sense of evangelism was behind it, and write it off as The Passion Of Moloch, but I suspect it was simply a misguided sense of film making that wrought this particular Heavy Metal parable.

Young Indiana and Boondock Saint Sean Patrick Flanery stars as Chris, our angsty rock hero. Chris' girlfriend, Lila, is played by Monet Mazur, as seen recently in Ice Cube-em-up Torque. The other "name" in the movie is oscar nominee Diane Ladd, playing the preacher/faith healer, and of the cast she is the only one to give the appearance of really putting in any effort at all, turning in a fair performance in the face of distinct mediocrity. Behind the scenes, the director is a mystery, as he Alan Smithee'd himself before the film's release, perhaps after the studio butchered his creative vision, or perhaps after someone with creative vision butchered him. One interesting credit is Chako van Leeuwen, who also worked on class James Cameron flying fish of doom picture, Piranaha II.

The villians of the piece (outside of the devil, of course) are a group known as the Coalition For World Unity. Through the powers of possibly the least charismatic man on the planet, rock legend Colin Grammercy (though I only realised he was a rock legend about two thirds of the way into the film) the Coalition is converting The Youth with the power of Heavy Metal. Evil Heavy Metal.

The coalition envisions peace through a one world government, and they're willing to kill to get it. However, unlike regular conspiracies, their killings are carried out by Demons. Or a Demon, to be precise, called Moloch. On the side of the forces of good is Chris, who gets kicked out of his band for being drunk, and if his later performances are any indication, for being crap. His girlfriend is also musical, and when her day job as a waitress is ended in a hail of drive by bullets, she decides to audition for the job of a backup singer with the dastardly Grammercy. Chris' Grandma dies, pushing Chris back to drink, and causing Lila to leave him. Of course, Chris tries and fails to get her back, eventually partnering up with Diane Ladd's feisty southern preacher Sister Kate to get his girl back from the CWU, and save the world for Jesus, and for Rock.

Outside of this outline there are several elements of the plot that serve little purpose apart from annoying and irritating the viewer. The most cardinal of these sins is committed by Shelley Winters, as Grandma Ruth. Anytime you see anyone credited as Grandma anything it's a warning sign, but in this case blazing klaxons and flashing neon signs could not prepare you for the amount of annoying that this woman can bring to bear. See, Grandma Ruth has visions, visions of doom for those around her. After Chris ignores a portentious vision she had concerning Lila, she goes to Sister Kate for help, hence introducing her to the picture. Why she goes to see her is fairly unclear since Sister Kate is a faith healer, and Lila was in a rock band, which is not one of the traditional complaints. In fact, why Grandma Ruth does anything is fairly unclear. I suspect that at some point during the rehearsals (if there were any) someone used the word "doddering" with regards to this part, and it was clearly taken to heart. Winters takes doddering to a whole new level, including a scene where you discover she owns a gun, which adds a dangerous edge to the dodder, until finally, during one of the film's high points, she falls down the stairs and dies, after croaking out her Final Thought. She was, as one may expect, killed by a demon. Since she was approximately as threatening to the Coalition as a boiled turnip, I suspect Moloch simply got the wrong address.

Looking at the rest of the film, it would be easy to make the assumption that it was created in the heady days of the 1980s, when most of the music was at least vaguely current. In fact it hails from 1995, and as such utilises the powers of space age computing machines to render the demonic effects. Unfortunately, the space age computing machines seem to have had coffee spilt down them as the effects are somewhat less than the horrifying hell beasts that one would hope for. Demon heads wobble about, swoop through cars, and do some poorly superimposed crawling around on the ceiling, and a distinctly lo-fi crackle of blue lightening regularly pops up as a signal of Evil Forces At Work, especially effective when it is shot from the end of a sword up to distances of literally inches. Unfortunately the analog special effects aren't much better. Apart from some quality pushing-through-a-rubber-wall type bits, the film features a deadly fridge skidding across the room, a light-the-paper and stand well back car explosion, and some fantastic outfits. Outside of the metal bands who presumably brought their own wardrobe, Moloch is a masterpiece of visiting the local fancy dress shop for a mask and having the props department knock up some high quality bat wings. While he gets to dominate the proceedings, costume wise, near the end of the movie we are treated to a bronzed, blonde, coiffured and backlit Angel who sports a look somewhere between a professional wrestler and an extra from a porn version of Gladiator.

Of course, we can't forget that outside of the demonic elements this is a movie about music, or more specifically about the glam-er side of heavy metal. From the wails of Chris' former bandmates during the opening to Stryper's stirring lyrca wearing hit over the end credits, this film is more rock than Tommy Vance in a quarry. The Coalition For World Unity's big event near the end of the film features a fairly decent performance by such a band, before Colin Grammercy takes the stage for some sub Billy Idol rockin', which is far less popular with the formerly enthusiastic extras in the crowd than the previous act. The good guys fare no better, having left their heavy metal past behind Chris and Lila are seen recording a new wave/goth-y kind of track at the end, which was sure to set the charts alight in Finland.

Overall, Ladd puts in a decent performance, Miss Mazuro is extremely fetching, and there are several moments when you don't want a rock to fall on Sean Patrick Flanery, but they just can't make up for the unpolished drek that is the rest of the movie. The credits indicate that this film is dedicated to the memory of some poor individual, presumably as a form of post-mortem final insult. There are worse things to do with your time than watching Raging Angels, but unfortunately almost all of them involved making Raging Angels.

The one review of Raging Angels on Amazon is very positive, so this film is presumably selling somewhere. Maybe they'll make a sequel.