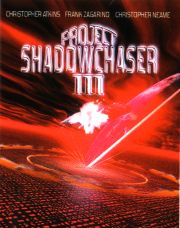 Still, the film was a departure for me, as my formative Frank "Frank" Zagarino experiences had him playing the sandy haired hero, not a Guile-haircut sporting killer android. Still, a Zag film is a Zag film, and I was more than willing to try a slice of budget sci fi horror on his behalf.

On closer examination, the rest of the cast isn't too disasterous. That said, I'm not sure the first words you want to appear on your title sequence are Sam Bottoms, who takes the male lead as Kody. Also on deck for our plucky band of heros are Ricco Ross, or as I like to think of him "the poor man's Duane Jones", as Lennox, Aubrey Morris, or "the poor man's Richard Attenborough", as the aptly named "Professor", Mark Phelan, or "the poor man's Willem Defoe" as Mac the Cap, Bill Kirchenbauer, "the poor man's David Koechner", as the X-Men gag inspiring* be-wheelchaired "Wheels", and Christopher Neame, "the poor man's Enrico Colantoni", as the money hungry Rico. The female element is provided by Robina Alston, who isn't really the poor anyone's anything, but does have more photos than credits on her IMDB page, and Musetta Vander as Rea. I'm going with "the poor man's Milla Jovovich" on that one, though I'm fairly sure that's a not entirely undeserved compliment. 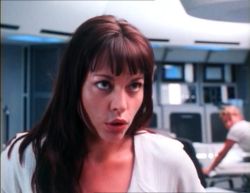 Our plucky spaceheros are doing their usual space bits on the communications satellite they call home - mostly sitting around and dressing in jumpsuits - when a huge ship called the Siberia starts bearing down on a direct collision course. I am hoping, from the bit of scene setting at the start of the film, that this is the ship from Project Shadowchaser 2, but I know that is being a little optimistic.

After managing to dodge out of the way of the Siberia, it wheels about and moves in again, and this time there is No Escape. As their little satellite is being pushed towards a certain death at the hands of the Martian surface, the crew have little choice but to ignore the warnings being automatically broadcast and board her, in an attempt to shut down the engines. Little do they know that lying in wait in the Siberia's Space Mutiny-esque extensive basement is the hideous deformed creation that is Franky Z's attempt at a Guile-from-streetfighter Halloween costume.

Of course, the former crew are on board as well, one of whom, by pure coincidence, is Rea's long lost scientist father. They're all dead, of course. And frozen, but who would let something like that put them off? From this point on the movie follows a fairly predictable horror route, with the crew getting involved in a variety of close scrapes until they manage to turn off the engines. Of course, at that point they discover that there's a Substance of Inordinate Value on the ship, and in search of profit decide to once again risk their lives, and acting careers. 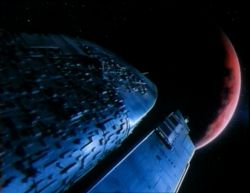 Considering this movie is on the cheaper side of cinema, the effects work is fairly nice, particularly the external model shots of the Siberia. Inside, other than the omnipresent sci-fi walkways-and-steam-vents warehouse bits, the sets for the ships are reasonably good, without the BBC wobble that often befalls budget sci-fi. There are some nice production touches as well, including the cards which vary from regular playing cards by zig-zagging in the middle, and some graphic displays that, while looking dated, at least look plausible as readouts, and are effective in the film - particularly the heart monitor type readout, which give the crew get their first hint they are not alone. In fact, the director John Eyres keeps the ZagBot under wraps untill around halfway through the movie, which works fairly well. There's even an odd twist in the music, as while most of it is the standard horror/sci-fi leaning on the keyboard variety, there's a jaunty twenties style song about space at the end.

In fact, much of the movie has some element of competence. Most of the actors can act, or at least try really hard, and while the performances might be cheesy, given the subject matter that's not necessarily a bad thing. Where the film falls over is in it's handling of the many, many clich?s employed throughout. Being that ZagBot can shapeshift, we expect and are dutifully served the "But you could be the shapeshifter! Hey, that's exactly what the shapeshifter would say!!1!" scenes where the main characters point guns at each other, and the pure grinding inevitability of one of the characters turning on the others in pursuit of profit is so omniprescent it actually comes as a relief when it finally happens.

Every time the script does accidentally lapse into marginally unfamiliar territory, the filmmakers seem to have been worried about the audience getting confused, and have a tendancy to rehash the main points. In particular, during the scenes near the start of the film as the crew try to propell their satellite out of the way of the Siberia, every time some tension starts to build the film cuts to long lingering shots of the exterior of the spaceship, just in case it was all getting A Bit Much. When that doesn't prove sufficient, there's always "Professor" on hand to launch into some length exposition, as obviously there were fears that the Memento-like story would confuse. 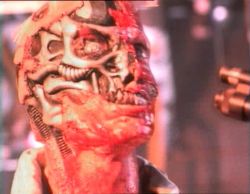 It is fair to say Shadowchaser III does stand out from many of the poundshop movies I've had the opportunity to enjoy. The budget was a touch higher than average perhaps, and certainly what was spent was all up on screen, aided by some decent cinematograhy and editing. Of course there are cheesy special effects, and cheesier acting, but they aren't a serious hindrance to enjoying the movie. What does hurt is the lego block way the movie was constructed, like there was a sci-fi horror checklist and they made sure to tick all the boxes. I'm not convinced the movie is all that worth a watch standing as is, though if you're a horror afficianado there might be something more here, and potentially watching the film as part of a trilogy would give you at the incentive to finish off.

Sharp eyed Project Shadowchaser fans will note I said trilogy, while there are in fact four films. I know this as I have the fourth film, and as far as I can see it has absolutely nothing at all to do with the other three, as even Frank's RoboZag character seems to bear little resemblance to the wisecracking spacejunk we've come to love.

* This statement may be factually a lie.