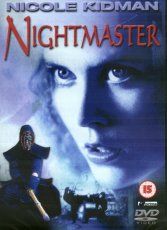 Aussies and paintballs and ninjas, oh my!

In the US and UK this film was known as Nightmaster, which sounds like a low quality computer RPG developed in the former Yugoslavia. In Australia, its country of origin, the film is titled "Watch the shadows dance", which sounds like angsty LiveJournal poetry inspired by the the leather trenchcoat wearing characters of the aforementioned game. These days at least, the draw of the film is the then fresh faced, 20 years old Nicole Kidman, who had not yet starred in one of the high points of her career, the sublime Bangkok Hilton, but had put in her performance in the peak of cinematic genius that is BMX Bandits. Other than the former Mrs Cruise, the cast is relatively low key, with the notable exception of drug dealer Guy Duncan, played by Craig Pearce who went on to co-write Baz Luhrman's Strictly Ballroom, Romeo + Juliet and Moulin Rouge.

On the other side of the camera, the film is directed by Mark Joffe who went on to make the ninja-less Spotswood, and Billy Connolly vehicle The Man Who Sued God. Providing a spot of new wave-y rock, and some piercing looks during his cameo, is oz singer/songwriter Paul Kelly in his sole film appearance, which curiously seems to be missed out from his otherwise very complete biography.

Of course, the reason any one would watch this is the presence of Nicole Kidman, who in this movie resembles a red headed microphone, a mass of fluffy hair and long legs. That said, while Nicole is an integral player, as Amy, the star is most definitely "Robbie", played by Tom Jennings who is famous for, well, not much really. I'm not sure whether conclusions should be drawn about the presence of a Grahame Jennings in the production credits, but certainly Questions Should Be Asked. 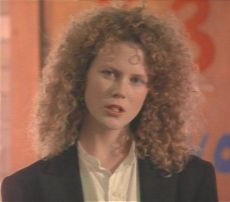 Robbie and Amy are still in school, along with a number of other students of dubious ages, but their lives are consumed with a secret game, a game of ninja uniforms and shuriken paintballs, glowy paint sticks and cunning traps. The game is their escape from the 80's view of the future they inhabit, filled with clacky laptops that suggest the blazing power of DOS 3, and homework assignments that are handed out on 5 1/4" floppies, which would probably be regarded as some form of bizarre sporting implement by modern school kids. Outside of school the world is a dark, foggy place, filled with slightly weirdly shaped cars, and security officers wearing outfits reminiscent of the Death Star operators.

The game is based in an abandoned warehouse in which the students, properly attired and armed, attempt to mark their opponents with paint to eliminate them, while moving towards a bell on a rope hanging from the ceiling, known as sanctuary, which wins you the game. Even if you can out-ninja all the other competitors there are a series of traps setup by the wheelchair bound gamesmaster and his gang of assistants, most of which consist of a net approximately the size of a tea towel falling on you. Robbie is the reigning champion of the game, thanks no small part to the special attention he receives from the martial arts/gymnastics teacher at school, Steve Beck, who sees the makings of a champion in him, presumably (we eventually gather) in the high profile world of kickboxing, or as I prefer to think of it, the official sport of Don "The Dragon" Wilson.

Steve comes from the John Kreese school of martial arts instruction, the "there's no mercy in this dojo" principle. While his simultaneous attempts to teach gymnastics and martial arts have disturbing parallels to Richard Norton classic Gymkata (tagline: the skill of gymnastics, the kill of karate), Steve mostly teaches a "second place is first loser" attitude that is covering up his own past, some terrible experience in the military. As Steve says, after looking at a photo of himself with his old unit, "all the men in that photo are dead". After Robbie almost kills someone in the game he begins to pull away from Steve's teachings and see Steve for what he is, and that's not just a low rent Martin Kove. Steve is addicted to drugs, and his dealer is the dastardly Guy Duncan. 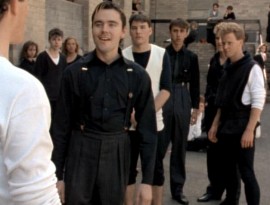 Guy and his gang of two scrawny youths represent the even darker underbelly of the future Australia. Dressed unerringly like Scottish indie darlings Franz Ferdinand, Guy and his posse hit on Amy, dis the game, and generally act sleazy. Unfortunately, after getting mashed trying to start a fight with Robbie, Guy's entrepreneurial brain comes up with the idea of blackmailing Steve, which ends Guy's life and his short, but meaningful, cautionary tale. Robbie witnesses the murder, causing Steve to try and eliminate him and setting up the final showdown deep in the warehouse. The battle is between the amateur ninjas of the student body and the (unexpected) real ninja that is Steve. To his credit, Steve does have a real ninja fan that makes short work of the net trap.

The film is a bit of a mixed bag, with the mix heavily weighted on the crappy side. There are some nice touches; Paul Kelly's lyrics during his bar performance narrating the drug dealing going on in the background, or Robbie's relationship with his mother, who is living in London and communicates exclusively via what appear to be pirated chinese VCDs, which blows Skype out of the water. On the other hand there is the general Neighbours level acting, the phenomenally cheesy fog and neon exteriors, rubbish sound effects from bad chanbara dubs, cops that look too ridiculous for the Sabotage video, and Ms Spane. Ms Spane is another teacher at the school who mostly serves to get Robbie out of a situation by tuning up, utterly inexplicably, to rescue him, on a motorbike.

I don't think the action milieu is Mark Joffe's strong suit. However, there were a lot of these aussie teen action movies during the 80s, and it may have been some form of permit requirement to make one, so I'll give him the benefit of the doubt. Yes, Nicole Kidman is in it, gives a reasonable performance, and looks great in a school girl uniform, but I suspect you'd have to be a bit of a completist/obsessive to watch it for that alone, though this is the internet so that's probably not too unlikely. The music's naff, the plot's thin, and the action, when it's there, is rubbish. On the other hand the final fight could have been worse and the film features some pretty weird dream sequences, but you'd still have to be really desperate for something to watch before choosing Nightmaster.

Amazon are trying to sell this with the description "The boundaries between real life and fantasy becomes blurred when Robbie and Amy play night games...", which may give you the wrong impression about the kind of action this movie contains. The flip side of the double-bill version from the poundshop contains a documentary about tomb raider. Woo.