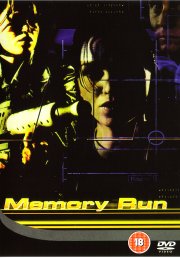 In a terrible betrayal of the movie, nothing in this cover is glowing blue.

How far back is it fair to go with the blame for cyberpunkish dystopian movies? Personally, I'm willing to punch a voodoo fascimile of Fritz Lang in the face for creating the sublime Metropolis, without which I'm sure we'd have had a lot fewer problem. On the other hand, Ridley Scott deserves a kick in the proverbials for Blade Runner, especially since a disturbing percentage of these films contain some variant on the word Run in their title. Memory Run, or Synapse as it seems to be called in America, is in fact not a low budget sequel to Johnny Mnemonic (oh how good that could have been), but instead tells the story of body crime, in a future time.

Andre Fuller (Chris Makepeace) is a criminal with a somewhat british gang and without much in the way of morals, thanks to witnessing the murder of his parents by the corrupt, totalitarian government when he was young. After a bit of the regular robbery shennanigans, and some boffing of the (entirely willing, ex-girlfriend) victim (Karen Duffy), Andre goes his merry way to sell some guns to floppy haired resistance leader Gabriel. Unfortunately, it seems the powers that be have designs for him other than a life of crime, and Andre soon finds himself stitched up (fairly amusingly) for her rape and murder, by one of his own gang no less. The punishment for this crime is to have his mind transplanted into his former girlfriend's body, and be brainwashed into an acceptable replacement. Thanks to the scientific genius of Dr Munger (Saul Rubinek), the manly Andre now inhabits the body of his former girl, with a new name, Celeste. Personally, I think the conditioning might have gone easier with, say, the name Andrea, but Celeste does roll off the tounge.

All this is at the behest of the mighty chairman of the Life Corporation, Bradden (Barry Morse). It doesn't take long to realise that Bradden has more interest in the success of Dr. Munger's experiment than merely as a new form of capital punishment, and when Munger fails in his attempts to condition him, Andre is then given over to the care of Munger's colleague, and Bradden's lover Dr. Meringue (IMDB claims it's spelt Merain, but I don't believe them). Meringue installs a device into Celeste's head that causes pain every time she is violent, but still this doesn't control her. Munger, outraged at what is being done with his work, does his best to help Celeste, but soon the experiment is given up on as a failure, and Celeste is sent to rot in a prison.

Fortunately, her cellmate happens to be the sister of a certain floppy haired resistance leader, and Celeste gets out, though at the cost of the cellmate's life. After taking revenge on her old gang, Celeste keeps the promise she made to find the resistance and tell Gabriel what happened. Celeste/Andre finds the resistance again in about three minutes, something you'd imagine the lifecorp would have been trying to do for a while.

Gabe has both key weapons of an underground resistance, floppy hair and trenchcoats. He also has the shoddy hang out, the disturbingly small number of men (though more do turn up and get shot at appropriate times), and an edgy, world weary charm that makes him impervious to bullets. Most importantly though, he has a SciFiBike. This bike is no ordinary one, featuring pointless smooth plastic bits the likes of which only Airwolf has seen, and a big ol' sidecar which accomodates two people. Disappointingly we never get to see Munger take a trip on it, though he must have utilised it as Celeste, Gabe, and the good doctor head to Lifecorp's HQ to take them down, and find out what happened to Andre's body. 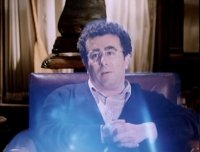 When it comes to the cast, one name dominates, despite not appearing on the cover (though neither does anyone else's), Saul Rubinek. He's slightly chubby, he's jewish, he cracks wise, and he's playing a doctor. His character, Dr Munger, is one of Shakespearian proportions. Trapped beween his blind passion for his work, his regret for what the horrors that work has caused, his compassion for Celeste/Andre, and of course his fear for his own life, Munger may be the defining character of low budget sci-fi in 1996.

In fact, he's part of a fairly reasonable cast, with the fetching Karen Duffy enjoying the leading role as Celeste (and I'm not even going to mention her tiny, tiny part in McBain *). Barry Morse and Matt McCoy play Bradden the baddie and the angelic Gabriel respectively, and both provide a strong dose of hey-it's-that-guy reactions, though without reference to their extensive careers on IMDB the only things I can actually remember them in are Space 1999 for Morse and Seinfeld for McCoy. But hey, Space 1999 and Seinfeld.

Behind the camera, director Allan A. Goldstein obviously had a message to communicate with this film, and that message was that the future is blue. The opening, where a young Andre's family are murdered by government stormtroopers, is presented in blue and white, and the night time views of the city are similar bathed in blue. The shields that guard, amongst other things, various buildings, and imprisons Dr. Munger in a comfy chair, glow an eerie, "cheap-special-effect" blue, and the lightening like bursts that zaps our heroes when walking through a forcefield is, of course, blue. If a given object can glow blue, it's fairly safe to say that at some point it will.

The other message here is one of gender issues. What happened to Andre is the subject of more than one distubing Christian Slater/Mr T. slash fiction outing in the literary outback of the internet, but it does make you wonder. Is Celeste female, or male? She pretty quickly falls in love with lanky Gabe even with her male brain. Is he gay, is she straight, are they both bisexual? The transgendered question is a difficult one which the film, well, pretty much ignores. 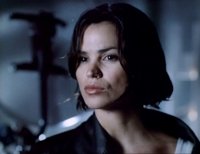 So OK, Memory Run might be bluer than BB King in a horrible loo cleaner accident, and the gender issue may get less screentime than people being shot in the chest, but the questions are at least in the script. The credit for that almost certainly belongs to Hank Stine, as it is his 1968 novel Season of the Witch that the film is based on. Though the actual book seems relatively hard to get hold of, the ebook is readily available. Interestingly, the ebook page claims that the book has been made into "a major motion picture", but declines to mention the title. Smart move.

At some point after writing Shadow of the Witch, Stine had a sex change and is known know as Jean, which implies parts of the book were more than just intellectual curiosity. The ebook is variously listed as romance, erotica, and sci-fi, so it may flag up some disturbing FBI list for strange people, but does feature a new afterword. Should anyone get it and it turn out to contain a reference to the film, please let me know. Especially if that reference mentions Saul Rubinek. Or if you are Saul Rubinek. That would be cool.

I didn't mind Memory Run too much, and as with so many of these movies much of the blame lies with paceless editing. In the tradition of all bad sci-fi, it replaces potentially confusing cerebral moments with gun fire, but people die with a fair wack of style, and the good guys wear trenchcoats. Saul Rubinek really is the best part of the film, but Barry Morse's performance is a close second (and Chris Makepeace's at the end deserves a nod). The story that peeks through is solid and, to be honest, more fit for the world of budget movies than the "I, Robot" end of the movie millions scale. Memory Run is worth a watch, and it's probably worth your quid at the poundshop, but I can't see it getting much repeat viewing.