In news that's sure to disappoint fans of rubbish South African action movies, I had been planning to review Operation Hitsquad - not, as it happens, a film about finding the latest boy band sensation - but since it's been months since I saw it, I've finally come to realise my subconcious is telling me something. Instead we return to the heady world of budget Sci-Fi, with director John Weidner (of Lamas' CIA and The Dragon's Out For Blood fame) and writer Robert Moreland (who also wrote the second best Air Traffic Control movie of all time, Ground Control) with their mid ninties classic, Space Marines.

Suprisingly, there aren't any other films with thee title Space Marines - at least that IMDB admits to - which is a little suprising given how generic it sounds. That said, Weidner makes an effort to include all the Sci-Fi staples we've come to expect, shake-the-camera impacts, exploding ship's consoles, odd uniforms, swirly space things and all. Luckily for him, and us, the movie is rescued from being a Hamil-less Wing Commander cut scene by the raw genius of John Pyper Ferguson, who squeezes every last brilliant, hammy drop from the script.

JP plays Col. Fraser, the leader of a band of Evil Pirates, and posessor of the accent and moustache of a Confederate general. Apart from plotting his own enrichment, and our heroes' demise, he lurches through weird self aggrandizing conversations with his pirates, and, in one of the best bits of the film, practices his villianous proclamations into a dictaphone before delivering them to his plucky space marine captive. 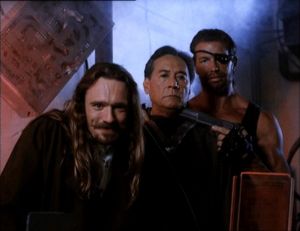 Said captive is Zack Delano (Billy Wirth), our hero and a rebellious young space trooper, serving under the wise Officer Gray Wolf and his plasticy APC of grunts. Zack gets into trouble with The Wolf when he ignores orders and goes literally several feet out of his way to rescue the low-rent Charlie Sheen-alike new guy. Clearly Leave No Man Behind is a bit more of an aspiration than a maxim to Gray Wolf, who was quite content to ditch AlternaSheen in the battlezone, but Zack's Kirk-like dedication to orders gets him a spell in the clink.

The whole shebang got started because Col. Frasier, his main heavy, Gunther, and a bunch of pirates hijacked a shipment of Highly Explosive Substances, and then ransomed it back to the United Earth Federation of Science Fiction Utopian Societies. Unfortunately, before Wolf's team of ultimate bad-asses can retrieve the boom juice, the politicans step in and insist on negotiations. Net result: diplomat, male and female leads taken hostage, Frasier retains both ransom and explosives, flamboyant cackling ensues. From then on, it's up to Zack to sort things in the expected heroic fashion. 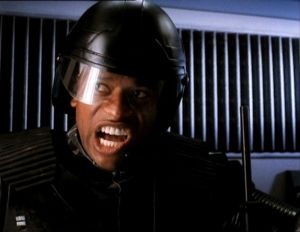 There's some good mook work on both sides in this movie. As might be predicted there are a variety of Marine types in the unit, including a Computer Guy cleverly called "Hacker", a hot-shot pilot called "Hot Rod" and a guy that dies called "Mike". The main concession to their grunt-y-ness is a trip to a (holographic) strip club, which results in some name calling and hair pulling over the death of "Mike", but does serve to make clear that a holographic strip club is both a silly and ineffectual idea.

The enemy mooks on the other hand to a good job of looking like space pirates - that is to say they look like pirates - and appear to have spent the required time at bad guy bootcamp, learning to miss at distances down to several inches, jump in front of incoming fire, and perform graceful somersaults during explosions. There's actually some quite funny stuff between Fraser and Gunther regarding their employees, and some old fashioned getting-shot-when-you-fail moments.

Amongst the principles JPF and Michael Bailey Smith nail their roles as Frasier and Gunther. The massive, eye-patched second in command provides an anger-management issue based foil to Frasier's flamboyance, and the two clearly had fun making the film. On the heroic side Billy Wirth acquits himself well, as does Cady Huffman, playing slightly liberal female diplomat, and frosty love interest, Dar Mullin. There's even a sort of little romantic subplot nicely hinted at between Cpt Gray (Edward Albert) and Cmdr Lasser (Meg Foster), veterans with evident sci-fi experience (both including Star Trek DS9 as it happens).

There are plenty of elements that work in the film as well. The soundtrack is big and brassy, and nails the kind of accompaniment you want to watch with what is, essentially, a popcorn movie - albeit £1 microwave popcorn. The CGI is competent, especially given the fact the film is over ten years old, and certainly doesn't detract from the hard won suspension of disbelief. There are some nice throwaway bits of comedy that play reasonably well, including Frasier's dictaphone moment, of course, but Dar's frustrated dealings with a uninterested videophone operator when trying to call for help from the Pirate's lair are almost equally amusing.

On the other hand, the plot is uniformly rubbish, and deeply derivative of things people really shouldn't derive from, like Seagal movies. The budget is probably all on screen, but there clearly wasn't very much of it in the first place, and there are a few too many moments of slow-mo scruffy pirates getting laser blasted. The ending also leaves a lot to be desired, it's almost as if the filmmakers suddenly realised they had to wrap this thing up and just found a convenient place to stop, which is fairly underwhelming.

Overall, Space Marines is probably for the more regular B-Movie watcher, but leans well into the entertaining part of the spectrum. There's a top notch villain performance by JPF, which is worth the £1 entrance fee on it's own, and I certainly enjoyed it more than, say, the much higher budget Wing Commander movie. You could certainly do worse, and I get the feeling that if I turned on the TV and Space Marines was on, I'd probably watch it again.