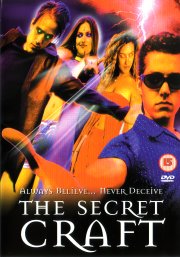 The tagline "Always Believe... Never Deceive" openly has nothing to do with the movie whatsoever.

Also, and originally, known as The Source in the states, The Secret Craft is a movie about four thirty something high school outcasts who gain incredible powers - and there's not a copy of Activating Evolution in sight!

Reese, played by Mat Scollon (who was in CSI once), is a moody young goth who has just moved to a small town in California with his father, a chemistry teacher. On his first day at school, in fine blazing Cali sunshine, Reese's black on black Hot Topic ensemble stands out, and he is mercilessly picked one - despite his array of Eminem style put-yourself-down comebacks. Reese soon runs into Zack (Edward DeRuiter), a nerdy rich kid who defeats some bullies with his knowledge of latin (or Zach, the coolest kid in the school, according to the completely misinformed back of the box), Zack's cocky sister Ashley (Melissa Reneé Martin) and her ditzy, hippyish friend Phoebe (quiet you), played ably by Alice Frank.

On a jaunt into the woods to take drugs and download illegal music, or whatever the kids do these days, Our Heroes discover some weird glowing rocks, and take the earliest opportunity to stand on them. This provides a euphoric experience, and, naturally, a superpower - though Zach quickly explains this with science, and a laptop. 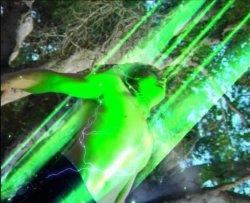 Zack gets the power to read minds, and broadcast creepy messages telepathically, Phoebe gets the power of telekinesis, Ashley gets The Voice, and Reece gets the power to heal/hurt himself/others, and have flashbacks to his mother's death. Pumped up with their psionic abilities, the team get down to the business of petty revenge on the people that have irritated them over the years, or in Reese's case, days.

Now I'm not an American, and I never went to school in the US, but I have seen all of both Buffy the Vampire Slayer and Veronica Mars, so I think I'm pretty up on the difficulties those in their mid-to-late twenties have in high school, but some of the educational methods at Secret Craft High seem a little off. 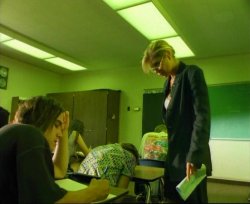 I'll give them the teachers sitting up on the desks, and generally having a relaxed and freewheelin' attitude - it's California - and I'll even give them the ridiculously unbalanced teams in the various sporting segments shown. However, if I was taking a test and some Aussie woman inaccurately accused me of cheating, then took away my paper and told me to spend the rest of the lesson with my head on the desk, that would be probably make me head straight for the NiN mp3s.

Throughout the film the teachers' main imperative seemed to be to belittle the students over their lack of knowledge - knowledge that, presumably, it was the teachers' job to impart to them. Perhaps it was all a clever ploy on the part of the film makers to cause us to empathise with Our Heroes, once they start abusing their powers for petty, petty revenge.

Zach, after enduring another assault on his intelligence by the fine and understanding history teacher, uses his mind reading skills to answer every question on whichever bit of historical trivia pops into the teacher's head, until he finally calls the bespectacled historian on an attempt to fake an answer. Phoebe, on the other hand, takes revenge on the evil Aussie by repeatedly breaking her chalk, and eventually, in a final act that surely destroyed all of AusTeachers self confidence, proffering some chalk of her own. Sir Gothalot gets his own back during another of the finely balanced games of dodgeball by making the non-nerd side unable to throw, so their balls require little dodging - harsh in anyone's book. Ashley uses her power of Command to have one of the male teachers to kiss her, and tells a bitchy blonde girl to get into a bin - though once in the bin the girl handles the bewildered gazes of the friends with an admirably dismissive "what?". 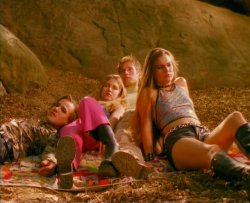 This section also features lots of posing for promotional effect, and walking up and down some grass in a sassy and in control way, but it wasn't too bad, for a montage. Of course, after this brief happy togetherness the abuse of powers starts to turn deadly, and what was once a kooky game for these wacky outcasts turns into a battle - a battle that (unexpectedly) is won with polka music - and if that doesn't want to make you see the movie, I don't know what will.

The film was written, directed and edited by Steve Taylor (he's a triple threat!), who went on to direct the somewhat better known, though probably not better regarded, horror movie Detour. The cast doesn't fare much better when it comes to notoriety, with a variety of TV credits to their names. Melissa Reneé Martin actually appeared on Veronica Mars as an 09er called Ashley, which I would say is validation of her performance in this film.

The effects aspects of the movie actually worked pretty well. The Beautiful People soundalike that our gothy hero rocks his deep inner hurt out to isn't a bad homage, and the rest of the soundtrack ticks along on the same kind of note. The special effects are roughly Highlander level (with some fine Quickening-y lightening at one point), and certain serve their purpose - letting the audience know that these people are Magical Wizards enhanced with the science of psionics.

Pound shop DVD collectors might be interested to note that this film actually comes with an Unlisted Special Feature, as on top of animated menus, scene selection and the trailer, there is also a gallery option. On the down side, the audio sync was completely out for several scenes, most notably at the very start of the movie, but it doesn't really "spoil" any of the deliveries. US Alice Frank enthusiasts might be interested to know that there is a half decent DVD available over there, including a commentary and all sorts of goodies.

Though a warning to Alias/Lost fans who may be tempted by the fact that David Anders (Sark/Kensei) is allegedly in this movie, - apparently it's only for five minutes, and I have to confess to not noticing him at all.

Overall, I really didn't expect to like this movie, and while I'm not exactly organising a Secret Craft convention, it didn't suck half as bad as it could have. The opening third is a little (glowing) rocky, but the film does get into a kind of a roll, and it ends in a solid, if predictable*, way. If you see it, do pick up The Secret Craft, as you might have more fun than you really should. Or if not, just put your head on the desk till the end of the film.