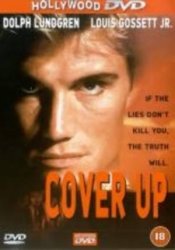 In many ways, a precursor to Passion of Christ.

There is nothing more irritating when watching a crap movie than suddenly realising that you are actually watching it for the second time, as I recently experienced while enjoying 1990's Cover-Up. One of the few things that can offset the creeping realisation that you have thrown precious life-minutes into the pit of despair that could otherwise have been used to read the latest musings of the internet's lively blogging community is the presence of Dolph Lundgren in the film. Big Dolph has had some classy roles in his time, He-Man, The Punisher, GR-13 in Universal Soldier, and a guy who's scared of milk (though not chocolate milk, so that's something), and Tarrantino started his career as a production assistant on Lundgren's fitness video, but this role, as investigative reporter Mike Anderson, is not his finest hour.

Mike, formerly a marine himself, is investigating an attack at a US army base in Israel and getting nowhere fast with base commander Lou Gossett Jr. who plays a character imaginatively called "Lou". As the title may have given away, something is being Covered Up, and when Mike tries to investigate with the somewhat reluctant help of his best friend Coop (John Finn) and ex-girlfriend, but now Coop's fiance, Susan (Lisa Berkely) all he finds is Danger and Death (for Coop at least). Mike learns that the attack was just a front, and that a deadly new form of poison gas was actually stolen from the base and that someone is planning to use the gas... TO KILL! Thanks to the opening scene, the audience knew most of that a lot earlier, but we'll let them pass on that one.

The thing about Cover-Up is that it's not an action movie, which is certainly what the big D was known for at this point in his career. Unfortunately, it's not much of a political thriller either, and so the action scenes are relied upon to hold up the movie at several junctures. While the few explosions in the movie are nothing special there is a lone, fairly well put together car chase, and some good one on one combat with an assassin, among others, but outside the inital heist the action, what there is of it, doesn't really kick in till well in to the movie.

Disappointingly the intrigue part of the movie is a little ropey as well. While Lou Gossett Jr. and female lead Lisa Berkley both put in acceptable performances they don't get the A for extra effort, and are matched by some equally lack lustre work from Lundgren. Only in the occasional scene, such as a paranoid walk around his hotel room after realising his phone is tapped do you really see he has a level of acting ability greater than the average action star. Even the shower sex scene, which had the potential to be a steamy chunk of cinema is more steamy in the water vapour sense than revealing. 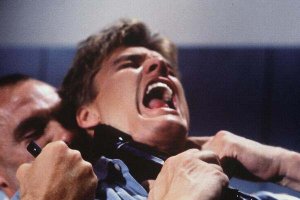 The real gems of moviemaking in this picture are the requisite ending twists. The first is in character, and works pretty well, while the second or "unnecessary" twist makes the effort to truly annoy the audience. This is probably not helped by the weird run through Jerusalem that a wounded Mike makes, mixing the religous imagery surround him with the ending of the movie in a way that undermines whatever effectiveness the location may have provided. The whole ending sequence is one of the best shot parts of the movie, but also one of the most fractured from the rest of the film, in terms of feel. It draws the film to a close effectively, and with a visual flair, but not satisfyingly. To be fair, the film does deserve some credit for the use of the locations, which do give the movie a distinct Israeli feel that must have taken some effort on the budget, and the location is related, if not integral, to the plot, rather than an attempt at an atomospheric add-on.

Many of the problems with the film are abetted by the sheer mountains of clich? that fill the movie. The villian's generic monologuing, to borrow a term from The Incredibles, to a captured and disarmed Mike and Lou tops the list, but there is plenty of generic fodder crammed in. The script does have some originality between the formulaic scenes, but it is sometimes hard to tell that the movie was written by people and not some kind of script generation program for the BBC Micro. Director Manny Coto doesn't help matters particularly with a lethargic style of direction, and no apparent interaction with his actors, which is a suprise given his work in horror movies up until then, a genre where pace is particularly critical.

This isn't to imply that the film is without entertainment value, Lou and Mike banter back and forth with an easy chemistry that showed up first in The Punisher, and their scenes are generally entertaining. The action is quite focused when it occurs, and in general the film seems like one tough editor away from being a decent channel 5 saturday night film.

In the end, unlike one of Dolph's later thrillers, Silent Trigger, Cover-Up doesn't even give us a ludicrously huge gun to provide amusement through the more tepid sections of the film. This is probably the better movie of the two but there are many other options in the genre that aren't so reliant on clich?, and are directed with more flair and pace. Still, the package is fairly slickly put together, and as a late night watch Cover-Up might just suffice to provide a gentle lead in to a sound nights sleep. Worth a watch at least once for Ludgren fans, everyone else will probably want to pass.

Why I keep putting these Amazon links up I don't know, but I just would hate for someone to suddenly realise they needed to see Cover Up and by unable to.