See kids, this is why you should visit the pound shop more often. Usually, yes, it's filled with tatty knock offs of popular products, or even dodgier semi-official versions of said popular products imported cheaply from Turkmenistan. Sometimes though you find wonderful items which you will treasure for life. Sometimes, you find Netionary. 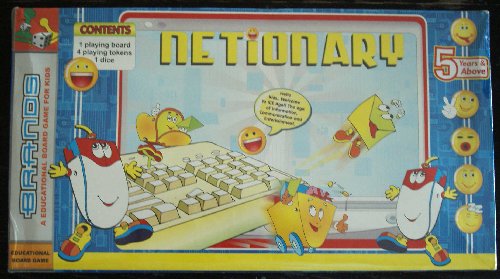 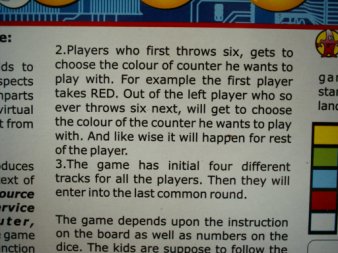 Netionary is an educational board game designed to teach kids about the internet. The phrase "designed" might be too strong a word, but it certainly features terms like "router", "URL" and "ISP", though the explanations are pretty much limited to what the kids pick up from the gameplay. Which is to say nothing. The game's instructions are printed on the back of the box, and feature a darn good stab at English. Unfortunately, they did not help my first, and so far only, game go at all smoothly.

The standard opening involves each player rolling the dice. The first to get a six then chooses which counter they'd like to be, something it turns out that can have major implications, as we saw later. However, once that person had chosen a counter it was unclear whether they then got to roll to move, or had to wait to the end of what I dubbed "the assignment phase". In the end it was decided this was Stupid Thing, and just chose colours.

With that over, it was time for the game proper. Each counter moves up their own track, but then they converge for the trip back down the board on a combined track, towards the finish. Roughly every other square on the route contains a little event, either aiding or hindering the counter's movement towards the finish. These feature a variety of internet-ty happenings such as "Router is transferring the data slowly, miss two turns", and are accompanied by a smiley, who seems happy no matter what. 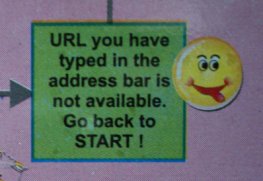 Interestingly, the event squares had a habit of throwing you onto other events. You might be moved forwards a step thanks to your ISP serving up the content, or paying for your shopping cart's contents with paypal (it's just a guess, but I don't think they got permission to use the PayPal(tm) brand), only to land on a "miss two turns" square, thanks to the evils of chatting or online gaming. You would think they'd have spotted that in testing, since it would happen every time you landed on those "bonus" squares, but that does make the somewhat foolhard assumption that there was testing. Still, since there are only 18 squares on the way up, it doesn't take too long to make it to the top.

Just when we were getting comfortable though, the downwards track added a new element which TURNED THE GAME ON ITS HEAD. Instead of the smiley chappy we were used to, each bonus had a world-sporting-a-giant-orbital-mouse icon, coloured red, green, blue or yellow. If your colour matched that of the square, then you did what it said, such as "move forwards three steps". If it was different, however, you'd have to do the opposite, and move backwards three steps. Unfortunately, the game's designers had clearly not playtested this one, and we eventually (read: immediately) managed to get yellow trapped in an infinite loop. 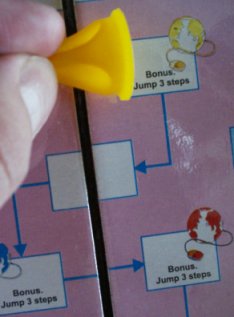 In the end it looked like Red was going to run away with it, but unfortunately on the next to last square he hit a "Go Back To Start" event. Blue took the victory and there was much rejoicing. In reflection, I think that Netionary taught me a lot about the internet, but perhaps not as much as, say, using Compuserve for a couple of minutes on a 9.6k modem. Still, when a colourful mouse wearing trainers and some poor quality MSN emoticons are trying to sell me a game, I'm damn well going to buy it. Assuming it only costs a pound, that is. 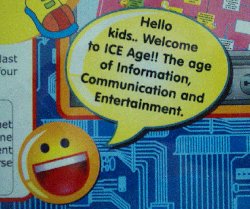